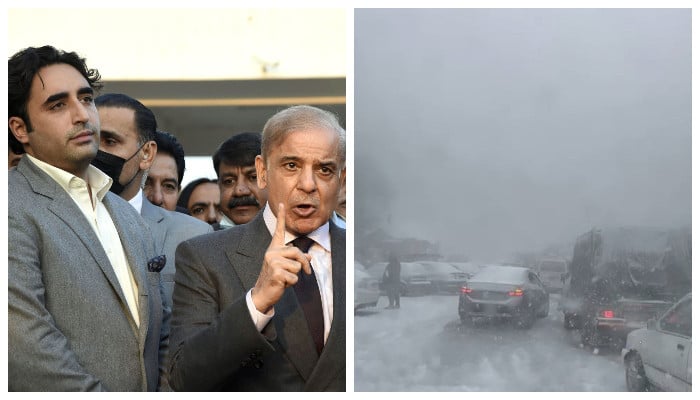 PML-N President Shahbaz Sharif and PPP Chairman Bilawal Bhutto-Zardari expressed sorrow over the deaths of tourists in Murree as heavy snowfall led to a chaotic situation in the hill station.

Terming the incident as “criminal negligence” on part of the administration, Shahbaz said the event has exposed the incumbent government, which “cannot even handle a traffic situation”.

The PML-N president questioned that when the government “knew” that such heavy snowfall would hit the area, then why did it not make arrangements to save the people.

“Does this government deserve to be in power if it cannot handle 1,000 cars? If tourists were headed towards [Murree] in such huge numbers, then why did the government not know about it? Was the administration asleep?”

The federal government has deployed the personnel of the Pakistan Army and other civil-armed forces after at least 20 people died in their vehicles in Murree.

Interior Minister Sheikh Rasheed has said that 1,000 vehicles have been stuck in Murree since night, with the government aiming to rescue them by today evening.

Shahbaz said if the incumbent government cannot rescue stranded people, then how can it rid the country of inflation. “Imran Niazi has no moral courage, so at least ministers and their subordinates responsible for this serious criminal negligence should be dismissed.”

For his part, Bilawal said the entire nation was saddened over the unfortunate incident in Murree, as he expressed sorrow over the demise of the people.

Meanwhile, PML-N Vice-President Maryam Nawaz said the government is not only responsible for counting the number of tourists, but it also has to make necessary arrangements for them as well.

“The person who mocked Shahbaz Sharif’s boots and service is sitting in his palace trying to save his failing government […] the government negligence is behind the deaths, not snowfall.”

The PML-N vice-president also prayed for the forgiveness of the deceased.

All the routes in Murree have been blocked after thousands of vehicles entered the city, leaving the tourists helpless on the roads.

The Punjab government has declared Murree as a calamity-hit area. Taking notice of the chaos and emergency situation, Punjab Chief Minister Usman Buzdar has directed to open the government’s offices and rest houses for the stranded tourists.