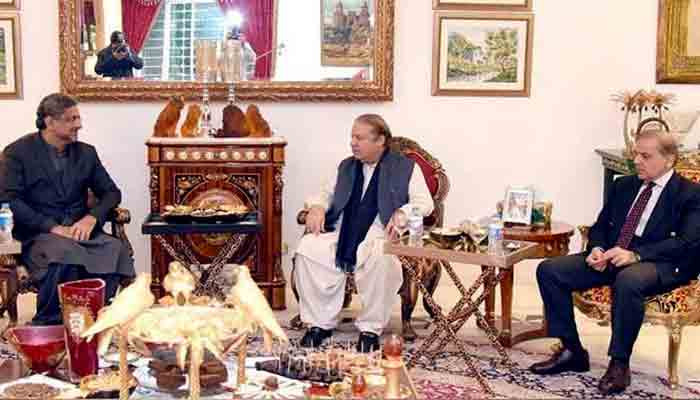 ISLAMABAD: Shehbaz Sharif will be the only choice from within the Sharif family for the office of prime minister but as of today he is not acceptable to those who matter, it was learnt.

Shahid Khaqan Abbasi is the first choice in case Shehbaz Sharif does not make it for one reason or the other. An informed PML-N source, who is close to Nawaz Sharif, said that at the moment Maryam Nawaz is not a candidate for the premiership. He said that the Sharif family has decided that if anyone from the family is to be nominated for the prime minister’s office in case the PMLN wins the next elections, it would be Shehbaz Sharif.

Outside the Sharif family, the top choice for the premiership would be Shahid Khaqan Abbasi, who interestingly is also acceptable to the powers that be. The source said that Nawaz Sharif is clear about Shehbaz Sharif’s nomination and also understands that Maryam can wait as age is on her side. However, through indirect messages, the PMLN top leadership has been made to believe that Shehbaz Sharif is not acceptable.

“We really don’t know why Shehbaz is still in the negative list despite his policy of non-confrontation,” the source said, adding that the thinking may change in the days to come. The source confirms “indirect contact” between the top PMLN leadership and the powers that be.

Whether it is Shehbaz Sharif or Shahid Khaqan Abbasi who finally makes it if the PMLN wins the 2023 general elections, the party will fully support whoever is nominated by Nawaz Sharif.

As for a change in government through a no-confidence move in the pre-2023 election period, the source said that neither would the PMLN be keen to form its government, nor would it be part of any “wider arrangement”. The PMLN has focused on nothing less than the premiership following the 2023 election.

A recent statement by Shahid Khaqan Abbasi that Shehbaz Sharif would be the PMLN’s candidate for the prime ministership in the post-2023 era, stirred a debate and generated controversy after Muhammad Zubair showed his reluctance to confirm Abbasi’s statement. Zubair, who is the spokesman of both Nawaz and Maryam, said that he had no information about any such decision. Instead, he argued that Maryam Nawaz could get a clean chit from the courts and be the frontrunner for the prime minister’s office.

Zubair said that Maryam is ambitious and a crowd-puller. He said that Maryam is capable of winning the election convincingly for the PMLN. Shahid Khaqan Abbasi said that being the President of the PMLN, Shehbaz Sharif, will be the party’s candidate for the office of chief executive. About Maryam, he said that she has been disqualified by the court and thus could not contest the elections.