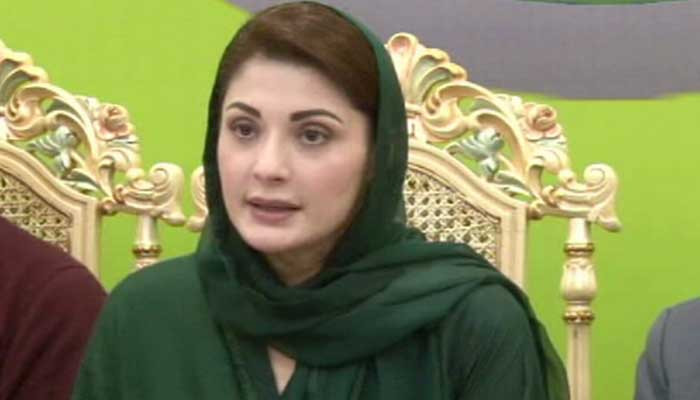 ISLAMABAD: Maryam said that the party has entrusted Nawaz Sharif to nominate the candidate. Shahbaz Sharif is the party president, she maintained.

She was answering a reporter’s question regarding PML-N’s potential candidate to contest the seat of the prime minister in the next general elections. “When the time comes, the PML-N will decide who is the most suitable candidate,” she said, adding that it would be a pleasure for her to support her uncle, Shahbaz Sharif, if his name is nominated.

Maryam Nawaz was interacting with the press Tuesday after appearing before the Islamabad High Court (IHC) in the Avenfield reference hearing.

Read more: Shehbaz or Khaqan, who will be premiership candidate of PML-N?

She advised the PTI candidates to visit their constituencies wearing helmets in the wake of recent upset in the in the first phase of the local government elections in Khyber Pakhtunkhwa.

She doubled down on her criticism of Prime Minister Imran Khan, demanding the premier step down and go home in light of the KP local government election results. She blamed the ruling party for the surging inflation across Pakistan.

“Imran Khan, leave poor people alone. Save the bit of respect you have left and go home,” she said. Maryam warned the PTI leadership that no leader would want to seek an election ticket from the PTI after the recent “embarrassing defeat” of the party in Khyber Pakhtunkhwa.

“It is the first sitting government in Pakistan that is losing elections one after another,” said Maryam Nawaz. She said that even the PTI’s lawmakers were criticising their government during talk shows.

Responding to a question about the Avenfield reference, Maryam Nawaz said NAB had failed to produce evidence against her before the court. “The NAB which was earlier seeking day-to-day hearings of the case is now seeking adjournments,” she added.

A day earlier, amid the ongoing local government elections in Khyber Pakhtunkhwa, Maryam Nawaz had taken a jibe at the PTI for its losses, saying the change that the party had promised is approaching its end and that too, in a humiliating fashion.

The government has pushed 220 million people of the country towards “inflation, lawlessness, and incompetence,” as a result of which the masses have been cursing the government, she had said.

On the request of NAB, the Islamabad High Court has adjourned the hearing Tuesday of Maryam Nawaz’s appeal against her conviction in Avenfield case without any further proceeding till January 18, 2022.

This is the second time the hearing was adjourned without any arguments. On November 24, the court had accepted the request filed by Maryam’s counsel Irfan Qadir, for adjourning the hearing without any proceedings because he was busy in another case at the Supreme Court. The court had subsequently adjourned the hearing on the appeal till December 21. NAB prosecutor Usman Rashid Cheema had filed a petition in IHC and requested to adjourn the hearing. According to the petition, the prosecutor had a high fever with excruciating body aches and experienced a “loss of smell and taste”. Therefore, he was advised not to travel and “take bed rest” as the symptoms were similar to those of COVID-19. A two-member bench of the IHC headed by Justice Amir Farooq heard the case and accepted NAB’s request for adjournment. PML-N Vice President Maryam Nawaz, Capt Safdar (retd), Junaid Safdar and party leaders were also present in the court.

Talking to media outside IHC, Maryam said NAB has no evidence against me in Avenfield case. She said it would be difficult to search for a candidate to contest election on the PTI ticket, adding the PTI is a symbol of disgrace.

She advised people who would be contesting election on the PTI tickets to wear helmets while going in public. People were angry due to ever-increasing inflation, unemployment, historic incompetence, and failure, she added. She said the PTI government was considering Khyber Pakhtunkwa their home, what happened in KP, she questioned. She congratulated Maulana Fazlur Rehman, who has won elections with grace. Calling the results decisions by people from across the country, Maryam said this was the “first sitting government lost by-elections one by one”.

She said the PTI should be ashamed on KP local bodies’ results and if Imran Khan commands any respect he should leave Prime Minister Office immediately. There is a golden opportunity for Imran to say that he cannot run the country, she further added.

To a question whether she believed the establishment had been neutral in the KP LB elections, Maryam said: “The results are there. I cannot say anything about the establishment but I can definitely say that Imran Khan’s performance cannot be supported by any power in the world. He has been crushed by his own performance.

“Regarding reports that PML-N President Shehbaz Sharif would be declared PML-N’s prime ministerial candidate in the 2023 general elections, Maryam said the decision would be taken by the party when the time arrives. The power to make that decision had been placed before former prime minister and PML-N supremo Nawaz Sharif, she said. “What can be of greater happiness for me than to see Shehbaz Sharif in power”.