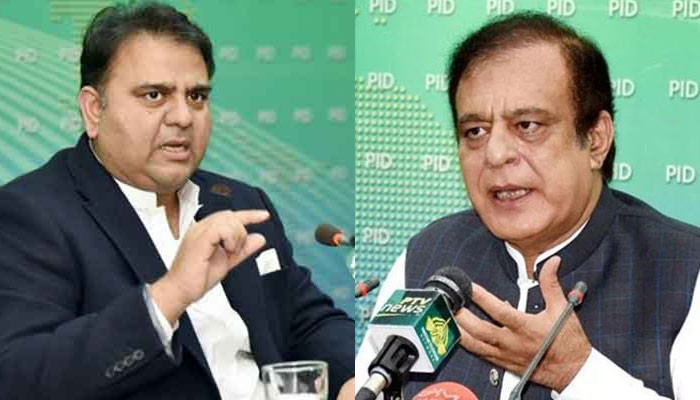 ISLAMABAD: Federal Minister for Science and Technology Shibli Faraz has opened a new Pandora’s box in a reaction to the statement of Information Minister Fawad Chaudhry about the funds of the Election Commission of Pakistan (ECP).

Briefing the media after a federal cabinet meeting on Tuesday, the information minister had said that after the passage of the new electoral law, it is vital for the ECP to hold all upcoming by-elections using EVMs. In case the ECP fails to do so, the government will not be able to release funds under the law, he had said.

Faraz denied that the federal cabinet had made any decision to obstruct the ECP’s funds. “The ministers had a casual discussion [over the issue] while Prime Minister Imran Khan was offering Zuhr prayers,” he said while speaking on Geo News programme ‘Capital Talk‘ along with a discussion panel consisting of former Sindh governor and representative of Maryam Nawaz, Muhammad Zubair, and The News Editor Investigation Ansar Abbasi.

Faraz said he believed that Fawad’s remarks had got some “unnecessary media attention”.

Reacting to Faraz’s statement, Zubair termed it “a very serious issue” and criticised the government over its decision-making process. “We all know, as Fawad Chaudhry briefed the media, that the cabinet has made this decision,” said the PML-N leader. “But, he [Shibli] is now saying that the cabinet decided it when the premier was not around. This is a very serious issue.”

It is a serious issue that the cabinet made such a crucial decision in the PM’s absence, which the PM himself does not own, Zubair added.

However, Faraz said no such decision was made at all.

Faraz said a more important news story is that the PM instituted a cabinet-ratified committee to sort out all electoral bottlenecks in the implementation of electoral laws.

“The Prime Minister had formed a ministerial committee comprising Babar Awan, Azam Swati, Aminul Haq and the attorney-general of Pakistan, with me as its convener, to facilitate the election commission in holding free and fair elections through EVMs.”

After the legislation regarding usage of EVMs, the PM wants the government to work in concert with the ECP to iron out their difficulties to hold elections through EVMs, the federal minister said. He also said the commission has requested the Centre to build testing laboratories and storage warehouses as well as they wanted the government’s support for training.

Faraz said the ECP was a constitutional institution and its basic responsibility was to hold free, fair and transparent elections, adding that it was the responsibility of the incumbent government to fulfill the requirements and provide all legal assistance to it.

The government wanted to make the electoral process more transparent through EVMs as it would help hold free, fair and transparent elections in the country, he said.

The minister said the Opposition was not ready to support the government on the use of modern technology in the elections because it knew that it would close all doors to rigging.

He said the PML-N and PPP had always won the elections by using unfair means as both parties were habitual of being involved in irregularities in the elections.

Replying to a question, he said the ECP did not reject to hold the elections through the EVM.

He said all the by-elections and local bodies elections should be held through modern technology.

The PML-N had always promoted their personal business during eras in their governments but did nothing for the betterment of the country or its people, he alleged.

ECP law-bound to hold next by-polls through EVMs: Fawad

Two weeks after passage of bills related to electoral reforms from a joint sitting of Parliament, the Federal Cabinet on Tuesday viewed that the ECP was “bound” to hold all the next elections including by-polls through EVMs.

“The federal cabinet, while discussing the most important decision on the EVM, opined that after amendment in the [election] laws, it is mandatory for the election commission to hold all next by-polls through EVMs,” Chaudhry told media persons after a meeting chaired by Prime Minister Imran Khan.

“If elections are not conducted through the EVMs, there is another opinion that the government will not be able to fund them,” he said, explaining the existing election laws that only gave legitimacy to the polls via the machines.

He said Federal Minister for Law and Justice Dr Muhammad Farogh Naseem was of the view that on prima facie, the government could only give funds to the ECP for elections if that were held through EVMs.

The government had formed a committee in that regard and the law ministry would give its opinion on the matter, Fawad added.

The minister said the ECP should ensure use of the EVMs in all the next elections as Parliament had given a mandate in that regard.

Earlier, the cabinet was briefed on the introduction of the electronic voting machine (EVM) and the empowerment of Overseas Pakistanis to vote, a statement from the PM’s Office had said.

Moreover, the information said the ECP would get funds from the government to hold the next polls only if it holds the elections via EVMs.

“The cabinet also expressed grave concerns over the release of a video of alleged vote-buying during the by-elections in NA-133. The cabinet said such illegal actions were anti-democratic,” the statement said.

The war for votes between PML-N and PPP in Lahore’s NA-133, where a by-election is due on December 5, had gone beyond the constituency to social media, where a viral video appeared to show voters being bribed by party members.

Both parties had blamed each other’s workers for the alleged move.