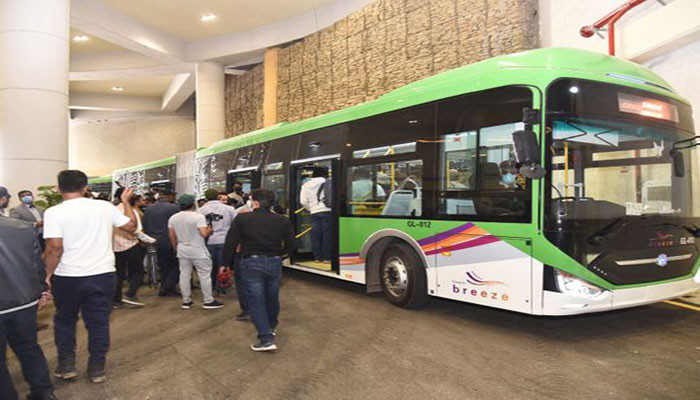 KARACHI: Sindh Governor Imran Ismail became one of the first users of the Green Line bus rapid transit service in Karachi on Saturday as it launched its limited commercial operation, being the first-ever modern mass transit system in the city. On the first day of the partial commercial operation of the Green Line service, the governor rode the bus from Numaish Chowrangi to the Hyderi Bus Station with the general public and media persons.

The governor reviewed the various components of the bus rapid transit system, and expressed satisfaction over the service delivery to the general public. People present at the Green Line station were pleased to see the governor amidst them and took selfies with him.

The governor himself purchased a Green Line ticket as one of its general passengers, and also inspected the facilities available on the bus. He told the media that the commercial service of the Green Line bus has been launched on a special day: Quaid-e-Azam Muhammad Ali Jinnah’s birthday and Christmas Day.

He said the government aims to launching such services that facilitate the general public. He hoped that other sections of the bus rapid transit system would become operational for the provision of a fully functional mass transit service in the city.

He also said the Sindh government failed to launch a viable public bus service in the city over the past 14 years, adding that the people are very happy due to the launch of the Green Line service.