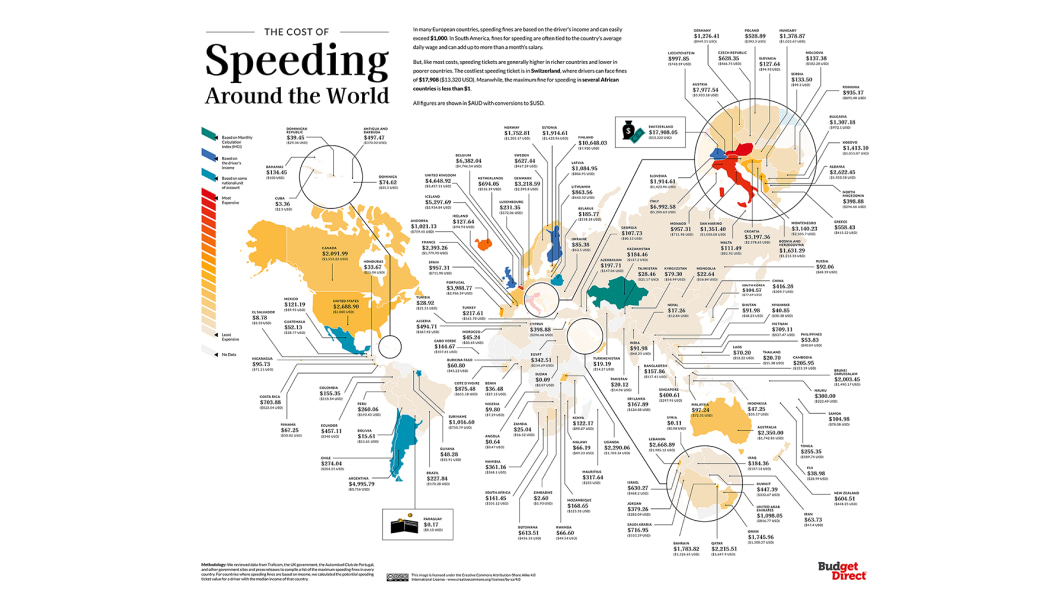 Australian insurance company Budget Direct decided to rifle through global file cabinets in August of this year to find the maximum cost of speeding tickets around the world. In the firm’s home market of Australia, speeding fines vary depending on the state where one gets caught. New South Wales authorities, where Sydney is, will ring you up for $2,350 AUD ($1,682 U.S.) for doing more than 45 km/h over the limit, while Victoria, where Melbourne is, maxes out at $793 AUD ($568 U.S.) for a similar speed — but this is all before the mandatory license suspensions, which will end up costing the offender more money.

Outside of Oz, some countries imposed fixed rates, others base a fine on the driver’s base income as a way to ensure the wealthy don’t view speeding tickets as a mere inconvenience on their time. In the latter case, Budget Direct used the median national income as the benchmark for judging the average size of a speeding ticket. Sudan had the lowest fixed rate. In both cases, the company didn’t include the costs of extra charges like being a repeat offender, getting caught racing, or reckless driving.

According to the Budge Direct charts created by NeoMam Studios, the U.S. takes the crown for all of North America, our maximum levy being $2,000, but the chart doesn’t pinpoint the state. According to the table at FindLaw, the state in question appears to be Oregon, assessing “Class A – D traffic violations with fines from $250 to $2,000 (OR Statute Sections 811.109 and 153.018).” Compare that to Nebraska, where going more than 21 mph over the limit will get you slapped with a bill for $200.

Argentina owns the collections box in South America, its max fine being $3,716 U.S. Much better to be caught speeding in neighboring country Paraguay, where the authorities charge $0.13. That’s right, 13 cents. If you want to save more money, don’t hit the throttle until you reach Sudan, the country with the lowest fixed fine at $0.09.

Having covered the gargantuan fines issued by some European countries, all of which were based on the driver’s income, it’s no wonder that the top 20 speeding fines ever issued are all in Europe. Breaking that down further, the top three happened in Switzerland out of four total for the country of chocolate and cows, Belgium and the UK score one each, the remaining 14 were rung up in Finland. The biggest whopper was a nearly $1M U.S. fine levied when a 37-year-old Swedish driver took his SLS AMG up to 180 miles per hour on the A12 between Bern and Lausanne, Switzerland in August 2010. The second-largest fine happened that same year in that same country in January, when a man in a Ferrari Testarossa was caught doing 85 mph in a 52-mph zone. Budget Direct clocks that fine at $327,000 U.S., but the Guinness Book of World Records lists the incident as the largest fine ever at $290,000. Either way, it’s a lot of money. Just as incredible, the sixth-largest fine of $141,661 got slapped on someone doing just 32 mph.

Check out the charts in the gallery for more fines large and small.