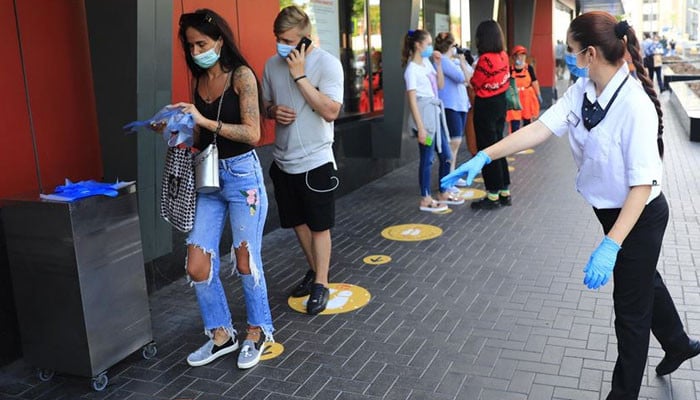 PARIS: The coronavirus is once again disrupting global sport, forcing the cancellation of English Premier League matches and the scrapping of a one-day cricket series.

AFP Sport looks at the state of play around the world as authorities scramble to cope with the surging pandemic.

— Five of the 10 Premier League matches scheduled for this weekend are off. The clubs are due to meet on Monday to discuss the crisis, with differences emerging over whether to temporarily halt the season as a firebreaker for infections or to carry on. Brentford manager Thomas Frank has called for a “circuit break” as positive tests multiply during the busiest time in the English football calendar. Liverpool boss Jurgen Klopp said it could soon become impossible to maintain the schedule as squads become over-stretched by Covid absences and injuries.

— Morocco coach Vahid Halilhodzic has expressed his fear that the already-delayed Africa Cup of Nations, due to kick off in Cameroon next month, could be called off due to the renewed threat of Covid-19 and the possibility that European clubs might not release players for the tournament.

— Real Madrid have reported a number of positive tests, with Gareth Bale and Luka Modric among the players affected. Under Liga protocols, a club must have at least 13 players, at least five of them first-teamers and one a goalkeeper, available to play a match. The club also reported cases in its basketball team.

— Covid has forced the cancellation of the one-day series between Pakistan and the West Indies. Five members of the West Indies touring party — including three players — tested positive for Covid on Thursday, in addition to previous positive cases.

— Australia captain Pat Cummins was forced to sit out the second Ashes Test after being in close contact with somebody who tested positive for Covid-19. Under South Australia state’s strict bio-security rules the fast bowler was required to isolate for seven days but has now been permitted to head home, where he must remain until the Boxing Day Test in Melbourne.

— The Indian cricket team arrived in Johannesburg on Thursday and headed straight for their bio-secure base at the start of a curtailed South Africa tour. India will play three Tests and three one-day internationals despite a surge in coronavirus cases in South Africa, but four planned T20 internationals have been dropped from the original schedule.

— European rugby chiefs have postponed seven matches in the Champions Cup and Challenge Cup competitions between UK and French sides due to strict coronavirus travel rules. Three matches had already been cancelled due to Covid outbreaks.

— The English Premiership announced on Friday that 47 players and seven members of staff, from nine different clubs, had tested positive for coronavirus in its latest round of weekly testing. That was sharply up from the previous week, when just five players and staff in total tested positive.

The National Football League on Friday postponed three weekend games amid a Covid-19 surge that has “seen a substantial increase in cases across the league.”

Saturday’s game between the Las Vegas Raiders and the Cleveland Browns was moved to Monday, while Sunday’s meeting between the Washington Football Team and Philadelphia Eagles, and the Seattle Seahawks v Los Angeles Rams game have been moved to Tuesday.

The NBA has boosted its coronavirus measures after a surge in cases. The new measures will include more testing and mask wearing for players and staff, according to reports. Increased daily testing will begin December 26 and last two weeks.

The National Hockey League said Friday it was postponing a game Saturday between the Boston Bruins and the Canadiens in Montreal because of Covid-19 concerns.

It is the 11th game postponed this season. That includes four Calgary games postponed as the Flames deal with a Covid outbreak that has 19 players under Covid protocols.