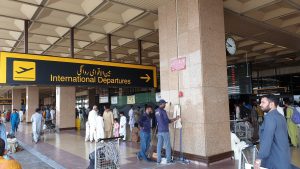 The Indian passenger plane made an emergency landing at Karachi’s Jinnah International Airport (JIAP) a day earlier after developing a technical fault during the journey. The plane departed for New Delhi in the early hours of Wednesday after Pakistani engineers fixed its fault.

Sources within the Civil Aviation Authorities (CAA) said that the Boeing 737 Max-8 of SpiceJet, flight no SG-9922 flew to New Delhi Wednesday morning after the engineers of Pakistan International Airlines fixed the fault.

According to a CAA spokesperson, passengers from the stranded plane were allowed to stay in a lounge at Karachi airport following the emergency landing. After a 12-hour stay, they boarded another plane and flew to Dubai. However, the unfit aircraft remained in Karachi for 18 hours for repairs.