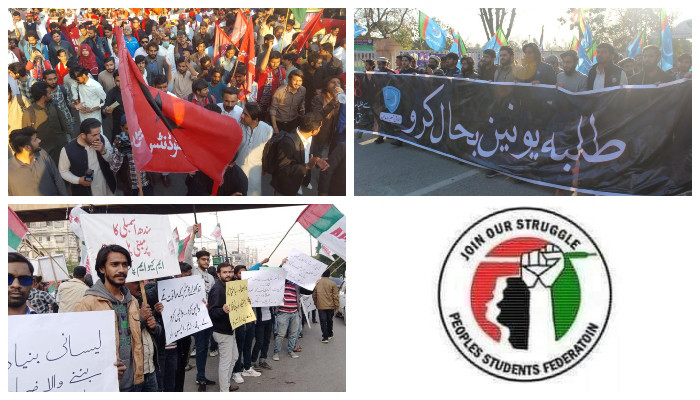 KARACHI: In a historic move on Friday, the Sindh Assembly unanimously passed the Sindh Students Union Bill, 2019, with student organisations from across the province welcoming the development, with some expressing reservations over it.

It has been 38 years since former military ruler General Zia-ul-Haq barred students from assembling on university and college campuses to demand their rights.

Soon after the passage of the bill, Progressive Students Federation (PRSF) Karachi President Waqas Aalam told Geo.tv that until and unless the Sindh government announces the election schedule, the organisation would consider it a “political tactic.”

“PRSF has reservations about the language of the bill, particularly about its vagueness and obscurity. Its laws do not explain campus laws that are going to apply to the union,” he said.

Moreover, there are several “technical flaws” in the bill which the PRSF, along with the Karachi Students Alliance, will tackle collectively.

“PRSF has been agitating on this since 2018 and the last time we met with Sindh government officials, they promised to table a bill regarding unions within two months. But it took them nearly two years to do so.”

The PRSF leader believes the bill would have been more effective had the Sindh government held a grand meeting of all relevant student organisations before getting the assembly’s nod.

The spokesperson noted that since the ban had been imposed 38 years back, students’ issues have remained unaddressed and educational institutions’ administrations have “not been held accountable”.

“With this step, we hope that student unions will be revived in their true spirits and the educational institutions will draft the rules and regulations within the mandated time,” he added.

“We hope that this isn’t just a political move and the government will deliver on its commitment,” Aqil added.

Peoples Students Federation (PSF) General-Secretary Talal Chandio told Geo.tv that the restoration of the union is a positive development for students, as he thanked PPP Chairman Bilawal Bhutto-Zardari for the move.

“Now that we have representation in the anti-harassment committees, we can make sure that our voice is heard and no injustice will be done with students,” Chandio added.

On the other hand, the All Pakistan Muttahida Students Organisations’ (APMSO) central cabinet member Sharjeel Baig stressed that it is the government’s responsibility to ensure that the unions revive so that students can finally get their rights.

“I hope that APMSO’s struggle for the revival of the students union will bear fruit,” he said.

According to the bill, a student union will be formed in every private and government educational institute. It further stated that enrolled students will be able to vote for the student union or take part in it.

Read more: Why are student unions still illegal in Pakistan?

Students would be able to form a union with seven to 11 student members through elections every year. The union will have representation in the institute’s syndicate, senate, and anti-harassment committee, the bill said.

The bill mentioned that no student would be allowed to use or keep weapons on campus, adding that educational institutes will decide the rules and regulations related to the union two months after the bill is passed.