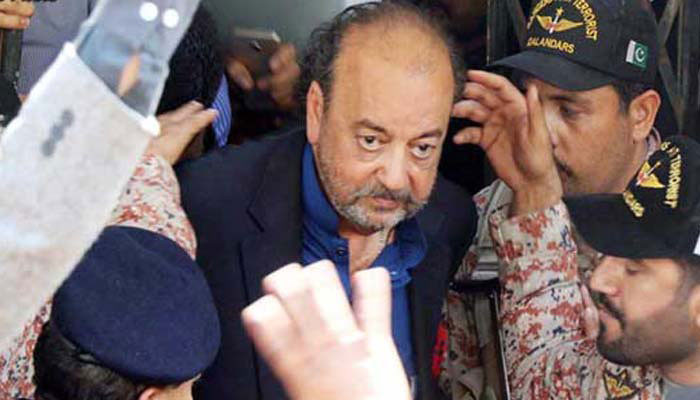 The orders were given during a hearing of the provincial assembly speaker’s plea seeking bail in an assets beyond means case.

A three-member bench, headed by Justice Umar Ata Bandial, was hearing the plea.

During the hearing, Justice Mansoor Ali Shah observed that the Sindh High Court rejected Durrani’s bail plea on the basis of merit.

“Supreme Court cannot conduct a hearing on this plea without the high court’s verdict,” he remarked.

“You must have been in the jail if SHC had rejected your bail plea,” Justice Sajjad Ali Shah said while addressing Durrani.

“Why should the court offer you leniency when you didn’t surrender to the police?” he asked.

The apex court ordered Durrani to turn himself in, saying: “First comply with the SHC’s order and surrender before NAB and then [the court] will conduct a hearing on this case next week.”

Meanwhile, the SC also rejected Durrani’s request to restrict NAB officials from arresting him from the courtroom.

“We have turned ourselves in before you [apex court],” Naqvi said.

At this, Justice Bandial directed Durrani to first surrender before NAB. “We had given you concession earlier as well. There is a high court’s order against you.”

“We will not interfere in NAB’s matter,” the judge stated.

The court later adjourned the case till next week.

Earlier, the apex court had nullified the SHC’s orders pertaining to his release on bail in the case.

Durrani and 18 others accused have been indicted in the case by an accountability court in Karachi.

The anti-graft watchdog had filed a reference against the PPP leader, his family members and others for allegedly accumulating assets worth Rs1.6 billion through illegal means.

The anti-graft watchdog claims Durrani was unable to account for a difference of Rs1,610,669,528 between his declared income from 1985 to 2018, and assets including properties and vehicles.

The bureau’s report said Durrani misrepresented the value of 27 declared and undeclared assets including properties and investments. NAB said the assets were valued at Rs479.4 million but the PPP leader showed them to be worth Rs151.6 million.