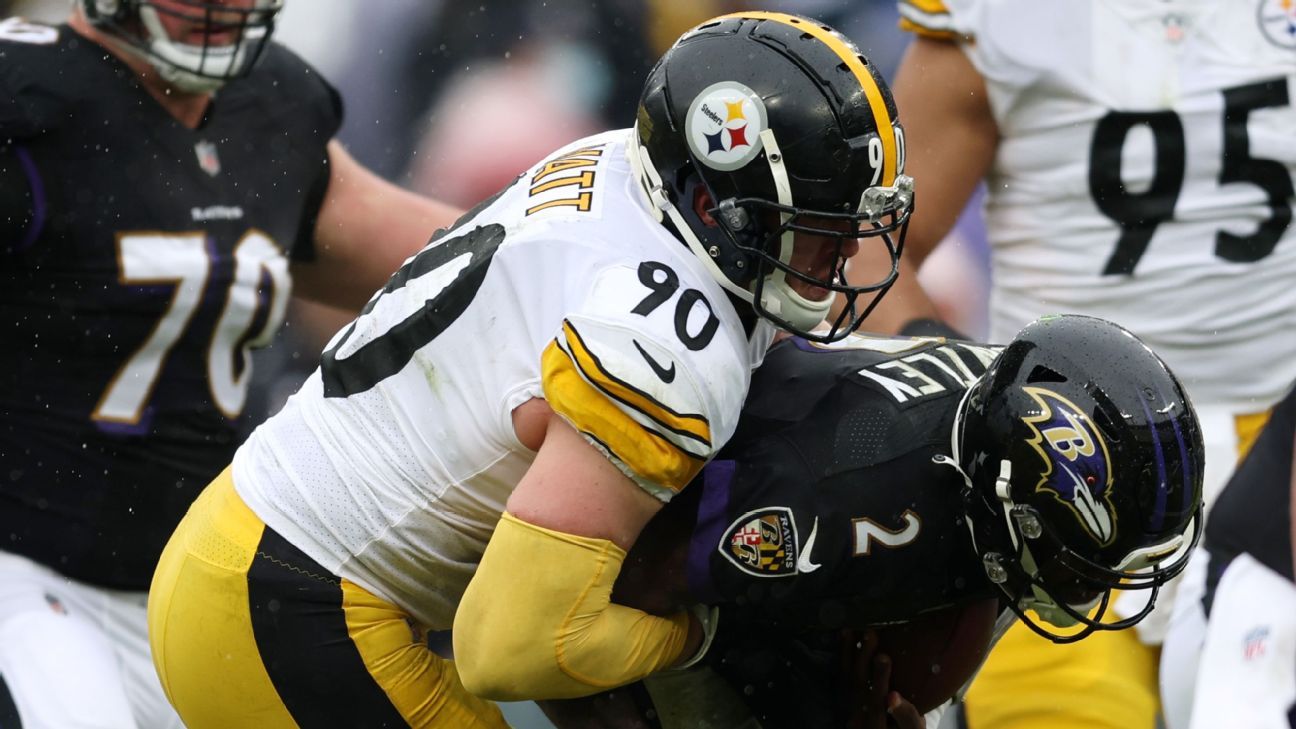 The win kept the Steelers’ playoff hopes alive in Ben Roethlisberger‘s likely last regular-season game as the Steelers’ quarterback. With the Jacksonville Jaguars‘ upset of the Indianapolis Colts, the Steelers would make the playoffs as the seven seed as long as the Las Vegas Raiders and Los Angeles Chargers don’t tie in the Sunday night finale.

Watt not only recorded the historic sack for a 22.5 total this season, he also had three quarterback hits, a tackle for loss, a batted pass and a forced fumble — all despite being doubled most of the game.

Watt got his lone sack of the afternoon with 23 seconds left in the first half, coming around the edge to beat tight end Eric Tomlinson and left tackle David Sharpe and bring down Huntley for a loss of three near the goal line.

He hugged and high-fived his teammates on the field before the next play. Before that official sack, Watt had two near-sack opportunities. On the first, he appeared to sack Huntley and force a fumble as Huntley scrambled to recover from a botched snap. But Baltimore Ravens’ scorer officially listed the play as a forced fumble.

Then, late in the second quarter, Watt wrapped up Huntley and brought him down with Cam Heyward’s help. But Heyward was whistled for unnecessary roughness and the half sack was negated.

To get to this point, Watt played through multiple injuries, including a lingering groin injury and a hip and knee injury sustained on a sack of Jared Goff against the Detroit Lions.

Just before the season, Watt, 27, signed a four-year, $112 million extension with the Steelers that made him the NFL’s highest-paid defensive player, cementing his status as one of the premier players in the league. He’s been a focal point of opponents’ pass protection, and yet, he’s still one of the league’s most disruptive and dominant players.

Through Week 17, Watt generated a sack on 6.1% of his pass rushes, the highest single-season sack rate in the Next Gen Stats era. He also has the third-highest Pass Rush Win Rate in the NFL when lined up as an edge defender, defeating his block within 2.5 seconds 25% of the time. Only Myles Garrett (28%) and Josh Sweat (26%) have higher Pass Rush Win Rates on the edge this year. And he’s more than just sacks — Watt also has four forced fumbles and three fumble recoveries.

Earlier in the season, Watt missed all week of practice after testing positive for COVID-19, but returned to record 3.5 sacks of Ravens quarterback Lamar Jackson and affect his throw on a would-be game-winning 2-point conversion.

To prepare for that game while in isolation, Watt ran laps around the trees in his backyard. But it’s not only his physical preparation that elevates him to one of the league’s best. Watt meticulously studies film for hours, honing in on cadence and counts to get any extra advantage.