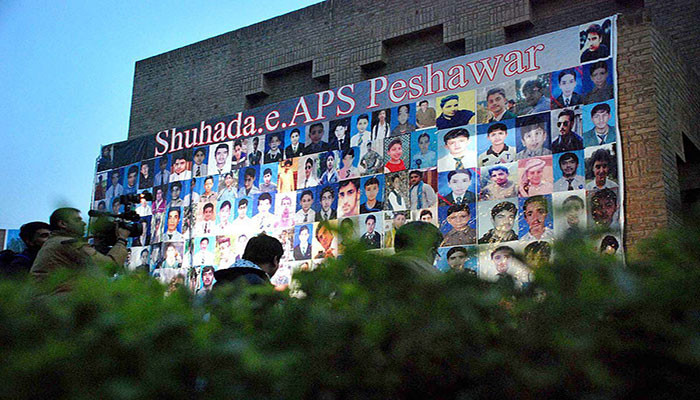 PESHAWAR: The tears of emotional parents who had lost their loved ones in the Army Public School (APS) tragedy made the environment gloomy as the seventh anniversary of the massacre was observed on Thursday.

As many as 147 people, including 132 students, were massacred in the most

tragic event on December 16, 2014, when a group of terrorists stormed the Army Public School on the Warsak Road in the Peshawar Cantonment.

The main function to mark the day was arranged at the Army Public School, which was attended by a huge number of parents and other family members of the martyred students and staff members of the school.

The venue for the gathering had been decorated with portraits of the martyrs, most of them children. Emotional scenes were witnessed on the sidelines of the functions as mothers expressed love for the martyred kids.

They were kissing and embracing the portraits of the martyrs as tears streamed down their faces. The monument to the martyrs was kept open for visitors from 8am to 4pm. A guard of honour was presented to the martyrs in the morning, which was followed by Khatmul Quran and prayer for the martyrs.

Another function was arranged by the Pashtun Tahafuz Movement (PTM) at the Archives Hall. But most parents preferred to attend the function at the school as they said that they didn’t want to give a political colour to the tragedy.

Some parents, however, turned up at the Archives Hall as well. Among them was Dr Zahoor Alam, who lost his only son Shahood Alam in the tragedy. Sharing his grief with reporters he said: “Shahood Alam was my only son. I lost him and became issueless. The state made me issueless.”

He added that he along with other parents was struggling for justice for the martyrs and their bereaved families. “The only thing we have achieved during the last seven years of struggle is that we managed to bring the names of the martyrs on the lips of Chief Justice of Pakistan and Prime Minister Imran Khan,” he maintained.

He said the report filed by the judicial commission under Justice Ibrahim Khan was placed before the chief justice of Pakistan wherein the killers had been identified. “Now the ball is in the court of the chief justice, who should take notice of the issue. He should get registered an FIR [first information report] against the declared killers and award punishment to them,” Dr Zahoor Alam said.

Ajoon Khan, president, APS Martyrs Association, insisted that all the parents attended the function at the Army Public School. After the function, they went to the office of a private news channel, which was running baseless propaganda against them.

They lodged a protest at the bureau of the television channel and held talks with its bureau chief and president of the Peshawar Press Club. The television was running baseless reports that the parents have got hefty compensation.

“I say whatever given to us should be taken back but FIR should be lodged against all those, who were occupying the important positions at the time of the massacre,” Ajoon Khan said. He said the parents wanted nothing but justice for their martyred kids and justice could be ensured only by lodging FIR against those responsible for the tragedy, he said. After the protest at the television office, the parents gathered at the house of one of the martyred students and shared their agonies, he added.