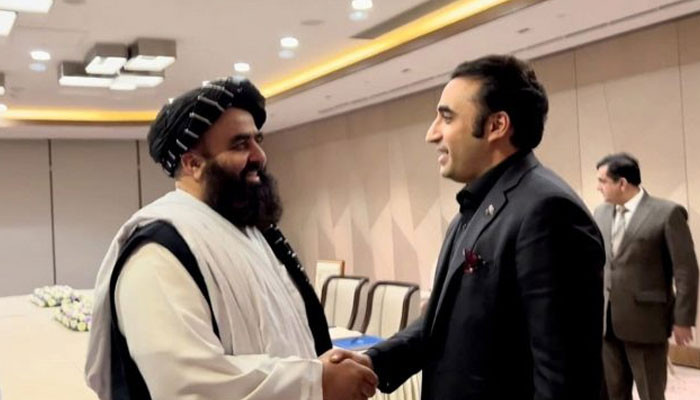 Terror attacks have witnessed a spike in Pakistan in the recent months following the ending of a ceasefire by Tehreek-e-Taliban Pakistan (TTP), an organisation that has found shelter in Afghanistan.

“Both, people of Pakistan and Afghanistan, are victims of terrorism,” FM Bilawal said during a telephonic conversation with Afghanistan’s acting Foreign Minister Amir Khan Muttaqi.

Stressing the need for joint efforts to eliminate terrorism from the region, the foreign minister said that the authorities of both countries “must do all we can to defeat this menace.”

During the conversation, the foreign minister also condemned the terrorist attack outside the Ministry of Foreign Affairs in Kabul, which took place yesterday, and offered his condolences.

Condemning the terrorist act in the strongest possible terms, the foreign minister underscored that terrorism posed a common threat to both Pakistan and Afghanistan and required a collective response.

“Terrorism posed a common threat to both Pakistan and Afghanistan and required a collective response,” the foreign minister said.

Reaffirming complete solidarity with the Afghan people in countering this menace, he underlined Pakistan’s commitment to work with Afghanistan towards promoting regional peace and stability.

A suicide bomber killed at least five people outside the Afghan foreign ministry, police said, and a nearby hospital said over 40 people were wounded.

The blast took place during a busy time of day in a heavily fortified area surrounded by checkpoints on a street housing several ministries. Some countries, including Turkey and China, have embassies in the area.

Following the attack on the ministry, Daish claimed responsibility for a deadly suicide blast outside, according to the militant group’s Amaq news agency. Amaq claimed that the suicide bombing killed and wounded scores of people, including diplomats.

The diplomat escaped the attack unharmed, but his bodyguard was critically wounded by the gunshots.

Later in January, the Taliban government in Afghanistan announced its forces killed several militants, most of them foreign nationals, from a Daesh network that was behind the attack on the Pakistan Embassy in Kabul last month.

In a statement, Taliban spokesperson Zabihullah Mujahid said the Afghan security forces carried out operations in Kabul against a network of Daesh that perpetrated attacks on the Pakistani mission and a hotel where Chinese nationals were staying.

Pakistan has repeatedly called on the Taliban administration to ensure that its soil isn’t used for terror activities — a promise that the Afghan government made, but has not been able to follow through.