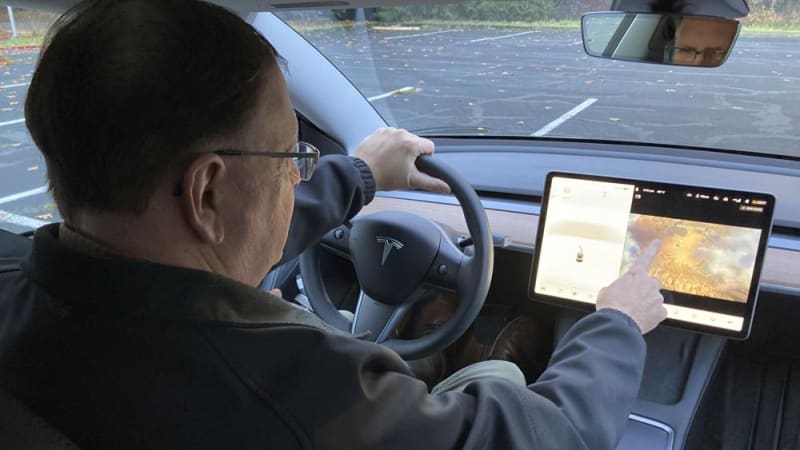 Vince Patton demonstrates on a closed course in Portland, Ore., how he can play video games while driving. Patton filed a complaint with federal regulators after discovering the feature in his new Tesla Model 3. (AP)

DETROIT — Last August, Vince Patton was watching a YouTube video of a Tesla owner who had made a startling observation: Tesla drivers could now play a video game on their car’s touch-screen dashboard — while the vehicle is moving.

Curious to see for himself, Patton drove his own 2021 Tesla Model 3 to an empty community college parking lot, activated a game called “Sky Force Reloaded” from a menu and did a few loops.

“I was just dumbfounded that, yes, sure enough, this sophisticated video game came up,” said Patton, a 59-year-old retired broadcast journalist who lives near Portland, Oregon.

He tried Solitaire, too, and was able to activate that game while driving. Later, he found he could browse the internet while his car was moving.

Patton, who loves his car and says he has nothing against Tesla, worries that drivers will play games and become dangerously distracted.

“Somebody’s going to get killed,” he said. “It’s absolutely insane.”

Which is why early last month, Patton decided to file a complaint with the National Highway Traffic Safety Administration, the government’s road safety agency.

“NHTSA needs to prohibit all live video in the front seat and all live interactive web browsing while the car is in motion,” Patton wrote in his complaint. “Creating a dangerous distraction for the driver is recklessly negligent.”

On Wednesday, NHTSA confirmed that it’s looking into the matter. News of Patton’s complaint was first reported Tuesday by The New York Times.

“We are aware of driver concerns and are discussing the feature with the manufacturer,” a NHTSA spokeswoman wrote in an email. “The Vehicle Safety Act prohibits manufacturers from selling vehicles with design defects posing unreasonable risks to safety.”

The spokeswoman declined to provide further details of its conversations with Tesla. The agency has not opened a formal investigation, which would involve requests for documents and other detailed information. Tesla, which has disbanded its media relations department, did not respond to messages from The Associated Press.

NHTSA’s inquiry marks the latest in a growing list of possible infractions involving advanced auto technology that are being reviewed by two federal agencies as potential safety risks.

The government is looking into Tesla’s Autopilot partially automated driving system, as well as its “Full Self-Driving” software system, which is being tested by selected owners on public roads. In addition, as it increases scrutiny under President Joe Biden, NHTSA is investigating over-the-internet software updates that are intended to fix safety problems and Tesla battery fires.

In its statement, NHTSA said that it continues to research driving distractions and that it’s issued voluntary guidelines for automakers to determine whether a particular task interferes with driver attention.

“If a task does not meet the acceptance criteria,” the statement said, “the NHTSA guidelines recommend that the task be made inaccessible for performance by the driver while driving.”

The agency noted that crashes involving distracted drivers killed more than 3,100 people in 2019, representing about 9% of all U.S. traffic deaths. But safety experts contend that distracted driving crashes are undercounted.

It’s unclear how long Tesla has allowed games to be played while vehicles are moving. But Patton said a software update that he noticed over the summer may have begun to allow “Sky Force Reloaded” to be used by drivers. The game, he noted, involves missiles and lasers that can be fired at objects.

Before the video games can be activated while the car is moving, drivers are asked whether they are passengers and must click a button saying they are. But Patton said there appears to be no way for Tesla to confirm that fact.

“If you’re alone in the car,” he said, a driver could lie and still be able to play while driving.

“That’s not much of a safety barrier,” he said.

Even if only a passenger is playing the game, Patton said, it can still be distracting to the driver because the game takes up about two-thirds of the touch screen. This also makes it harder for the driver to see warnings and controls for windshield defrosters, he said.

Previously, Patton said, games could be played only while the vehicles were in park. Many drivers use them while waiting for batteries to be recharged at Tesla’s Supercharger stations, he said.

Jason Levine, executive director of the nonprofit Center for Auto Safety, said in an email that NHTSA has the authority to declare the vehicles defective and to seek a recall.

“There’s little question that having a large screen next to the driver on which the driver, or a passenger, can play a video game while the vehicle is moving is an unreasonable risk to safety,” Levine wrote. “NHTSA’s recent statements would suggest this feature has been in violation of both the spirit and letter of NHTSA’s driver distraction guidelines and the law.”

Tesla’s Autopilot system has been misused by drivers in the past, who have thwarted its system for detecting hands on the wheel. In one case, a driver in California was arrested while riding in the back seat as the car rolled down a freeway.

After investigating two fatal crashes involving Autopilot, the National Transportation Safety Board recommended that Tesla install a camera system to ensure that drivers were paying attention. The agency said in October that Tesla hasn’t officially responded.

Tesla has said that, despite their names, Autopilot and “Full Self-Driving” are only driver assist systems and cannot drive themselves. It says drivers should always pay attention and be ready to take action.