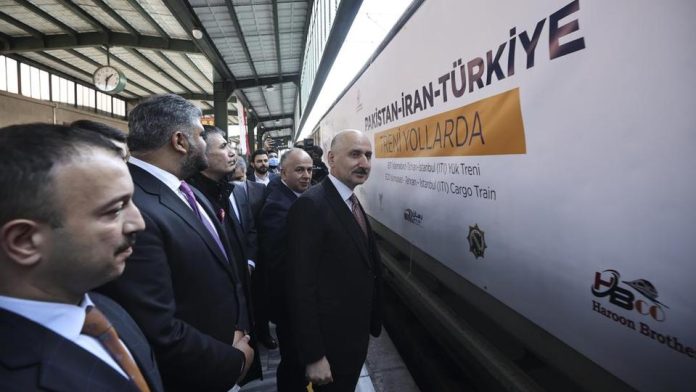 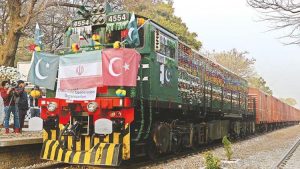 The Istanbul-Tehran-Islamabad (ITI) cargo train connecting Turkey, Iran, and Pakistan, was re-launched after a 10-year break on December 21 2021, with the aim of providing a significant boost to trade between the three nations and throughout the region. The ITI cargo train started its journey from Islamabad and arrived in Ankara in around 13 days.
On Wednesday, the Turkish capital hosted a ceremony to celebrate the arrival of the first Islamabad-Tehran-Istanbul (ITI) train bringing cargo from Pakistan to Turkey via Iran since its resume of operations. The event was attended by Turkey’s Transport and Infrastructure Minister Adil Karaismailoglu, Pakistan’s National Assembly Member Makhdoom Zain Hussain Qureshi, and Iran’s Ambassador to Turkey Mohammad Farazmand.
The train travelled 5,981 kilometres (3,666 miles) in 12 days and 21 hours, departing from Islamabad’s Margalla station. The cargo train is intended to increase trade between Pakistan, Iran, and Turkey. It consists of eight loaded carts, each 20 feet long and capable of carrying 22 tonnes.
In his remarks, Karaismailoglu stated that the new railway will provide new choices for entrepreneurs and businesses on the Pakistan-Iran-Turkey route. He further stated that “It will save time and cost compared to sea transportation between Pakistan and Turkiye, which takes 35 days, and will lead to the development of trade between the two countries.”
Speaking during the event, Makhdoom Qureshi emphasized the importance of the ITI train in improving regional connections and promoting economic and commercial activities in the ECO (Economic Cooperation Organization) region. He said that the train would allow Pakistan to enhance its exports and strengthen its ties with international markets, notably in Europe. We need to increase the trade with our neighbourhood and this project will become a friendship project.
In his remarks, Ambassador Farazmand stated that the ITI railway project initially began in 2009 under the Economic Cooperation Organization but was discontinued owing to technical concerns and revived after ten years. He stressed that the three countries want to start a passenger train along the same route in the near future.