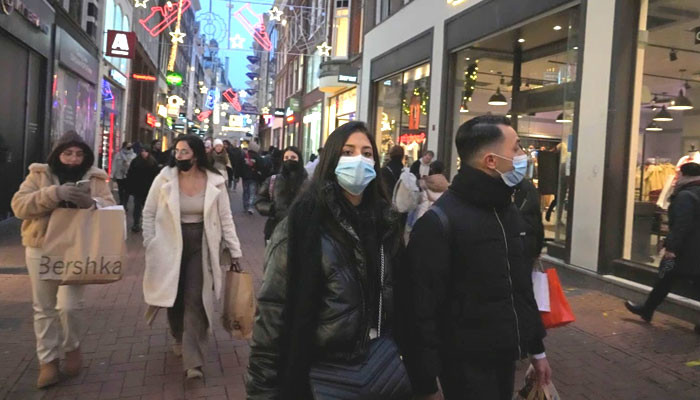 THE HAGUE: The Netherlands will go into “lockdown” over the Christmas period to try to stop a surge of the Omicron coronavirus variant, Dutch Prime Minister Mark Rutte said Saturday.

All non-essential shops, restaurants, bars, cinemas, museums and theatres must shut from Sunday until January 14, while schools must close until at least January 9, Rutte said.

People are now only allowed two guests at home, except for Christmas Eve, Christmas Day, December 26 and the New Year period when four guests are permitted.

“To sum it up in one sentence, the Netherlands will go back into lockdown from tomorrow.

“It is inevitable with the fifth wave and with Omicron spreading even faster than we had feared. We must now intervene as a precaution.”

The Omicron strain would soon overtake the Delta variant in the Netherlands, said the head of the Dutch outbreak management team, Jaap van Dissel.

“Between Christmas and the turn of the year the Omicron variant will become dominant,” van Dissel told the news conference.

The scientist warned that if Omicron’s effect is as strong as Delta’s, hospitalisations could exceed those in the first wave of the disease in early 2020.

“We know that the variant can outflank built-up defences from previous infections or previous vaccinations, especially if that was some time ago,” he said.

Rutte’s announcement came after an emergency cabinet meeting, and just four days after the government extended its previous measures and announced that schools would start their holidays earlier.

Long queues developed outside shops earlier Saturday as people rushed to do last-minute Christmas shopping as reports of the new measures emerged.

“It’s too busy, but I’m coming before the Christmas holidays to pick up gifts, it seems like a new lockdown is coming,” Ayman Massori, 19, told AFP in The Hague.

Rutte, who earlier this week reached a coalition deal that will give him a fourth term as premier, acknowledged the effect on the national mood during the festive period.

“I can now hear the whole of the Netherlands sighing. This is exactly one week before Christmas, another Christmas that is completely different from what we would like,” said Rutte.

But he insisted that “Omicron is forcing us to limit our number of contacts as quickly as possible, and as much as possible, which is why the Netherlands will be locked,” he said.

The Dutch Covid restrictions have led to a 21-percent decline in infections in the week from December 7-14, according to official health authority data.

The Netherlands also recorded a “slight decline” in hospital admissions, but authorities insisted that Omicron was still “a cause for concern”.

Nearly 86 percent of all adults in the Netherlands have been vaccinated.

But the Dutch booster campaign has been slow to get off the ground, and Health Minister Hugo de Jonge said all over-18s would now get an invitation by January 7.

The Netherlands relaxed most social distancing measures in September, but by November infections were back up to record levels of more than 20,000 a day.

The restrictions have been unpopular, with riots breaking out in Rotterdam, The Hague and other cities in late November.