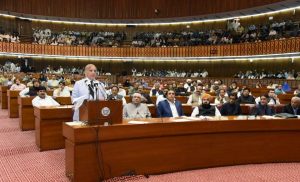 The Cabinet of Pakistan’s newly-elected Prime Minister, Shehbaz Sharif, has been sworn in during a brief ceremony. Acting President Sadiq Sanjrani administered the oath to the 31 federal ministers, three ministers of state, and three advisers to the prime minister at the Presidency in the capital, Islamabad, on Tuesday.

The ruling PML-N has 14 ministers in the new cabinet. The PPP has nine federal ministers, two state ministers, and one adviser to the PM. JUI-F has four ministers, MQM-Pakistan has two, while JWP and BAP each have one.