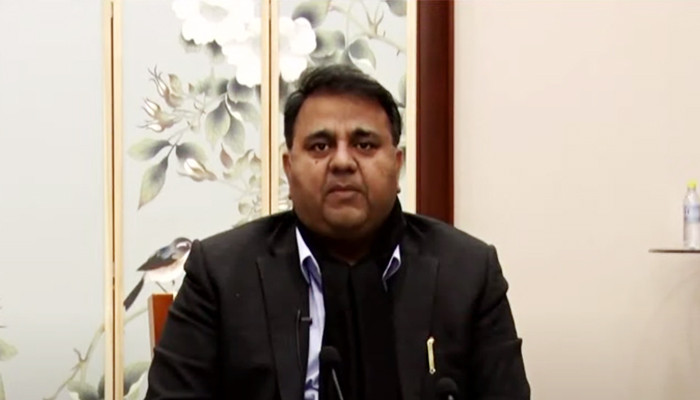 Minister for Information and Broadcasting Fawad Chaudhry on Saturday slammed the PML-N and PPP, saying the Opposition’s defeat in the Senate had brought them together.

The Senate had last month passed the State Bank of Pakistan (Amendment) Bill 2021 amid an outcry from the Opposition, where they enjoy a majority.

“The humiliating defeat that they suffered in the Senate has resulted in today’s meeting and they will face similar defeats in the future,” Chaudhry said in a press conference from Beijing shortly after PML-N and PPP decided to use “all options” at their disposal to oust the government.

The information minister said with time, the “desperation of Pakistan Dheelidhali Movement” is increasing, and they have started to lose patience.

“They believe they might face defeat in the next elections. Therefore, they have decided to join hands and contest elections,” Chaudhry said, assuring the Opposition that the government would defeat them even if they unite.

The information minister said whenever any government seeks to bring the “money they have stashed abroad or try to put a stop to the crimes they commit”, the Opposition starts coming together.

“We have time and again reiterated that this is a gang of criminals.”

Chaudhry said PM Imran Khan is the most popular leader of the country and the incumbent “does not care” about the Opposition parties uniting to oust his government. “It has never bothered us in the past, and neither will it bother us in the future.”

The information minister said the prime minister was currently working for Pakistan’s foreign policy — as he is in Beijing on a four-day visit. “The dream he had envisioned of a Naya Pakistan will come true” as the government is working on all fronts for the country’s progress, he added.

PML-N, PPP ready to use ‘all options at disposal’

A few hours before the information minister’s presser, PPP and PML-N agreed to use all legal and political options at their disposal to dismiss the incumbent PTI-led government.

“If we want to save this country from destruction, then we will have to get rid of this government,” Opposition Leader in the National Assembly and PML-N President Shahbaz Sharif said.

The press conference came after Former president Asif Ali Zardari, Bilawal attended a luncheon at the residence of the opposition leader in the National Assembly.

“If we don’t join hands and come on the same page, then the nation will not forgive us. We spoke in-depth about the option of a no-confidence motion [against PM Imran Khan].”

For his part, Bilawal said he had discussed his party’s strategy against the government with Shahbaz and other PML-N leaders present in today’s meeting.

“We discussed matters in detail. We came to a conclusion that a decision [with regards to ousting the government] is very crucial, given the burden of rising inflation on the masses.”