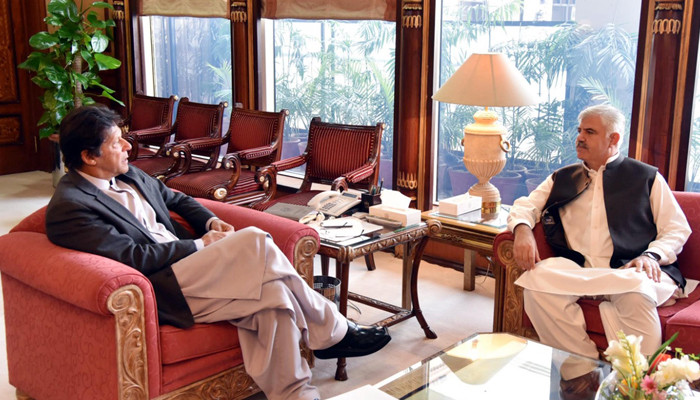 ISLAMABAD: Prime Minister Imran Khan said Wednesday tickets will not be awarded on the basis of favouritism and bribery in future as PTI faced a major setback in the Khyber Pakhtunkhwa local body polls due to “incompetent” people.

The prime minister’s comments came during a meeting with Chief Minister KP Mahmood Khan, where the province’s chief presented a report on why the party suffered losses in the local body polls, sources said.

The premier had summoned CM Khan to present a report on the PTI’s defeat during the elections in the province, highlighting the reasons that lead to the party’s failure.

Sources said that the report mentioned the lawmakers who did not support the party during the polls, allocation of party tickets for the elections, and other issues.

The report attributed PTI’s defeat in the first phase of the elections to “mismanagement” and that “workers of the same party contested elections against each other.”

Sources further added that the report cited “traditional politics and hereditary issues” as reasons behind the defeat in the local body elections, adding that the distribution of party tickets was also a reason behind PTI’s failure.

According to the report, the poor selection of candidates led to disagreements between party workers; hence the party wasn’t united during the first phase of the elections.

During the meeting, the premier expressed his dissatisfaction over the party’s failure in the local body elections, saying that Khyber Pakhtunkhwa was their [PTI] baseline and the party lost the election due to “internal incompetence.”

The premier said that in the second phase of the local body elections, he will personally decide candidates, adding that favouritism and bribery would not be tolerated.

The premier also reportedly stated that the party should learn lessons from the results of the first phase as this time indifferences among the party members benefitted the opposition.

Earlier, the Prime Minister’s Office received a report citing reasons for the PTI’s loss in the local body polls in KP. According to the report, merit had been ignored while allocating tickets for the election.

The tickets had been issued to the relatives of the governor, ministers and the lawmakers of the PTI, read the report.

The report said that PTI MPA in Lakki Marwat Dr Hasham Inamullah had been ignored while allocating the tickets. Resultantly, Inamullah extended his support to the four candidates fielded by the Saifullah brothers who went on to win the local body elections, read the report.

Shafi Jan contested the election as an independent candidate and bagged more votes than the PTI candidate in the constituency. Shafi Jan bagged 26,793 votes while the Afridi-backed candidate received 15,219 votes.