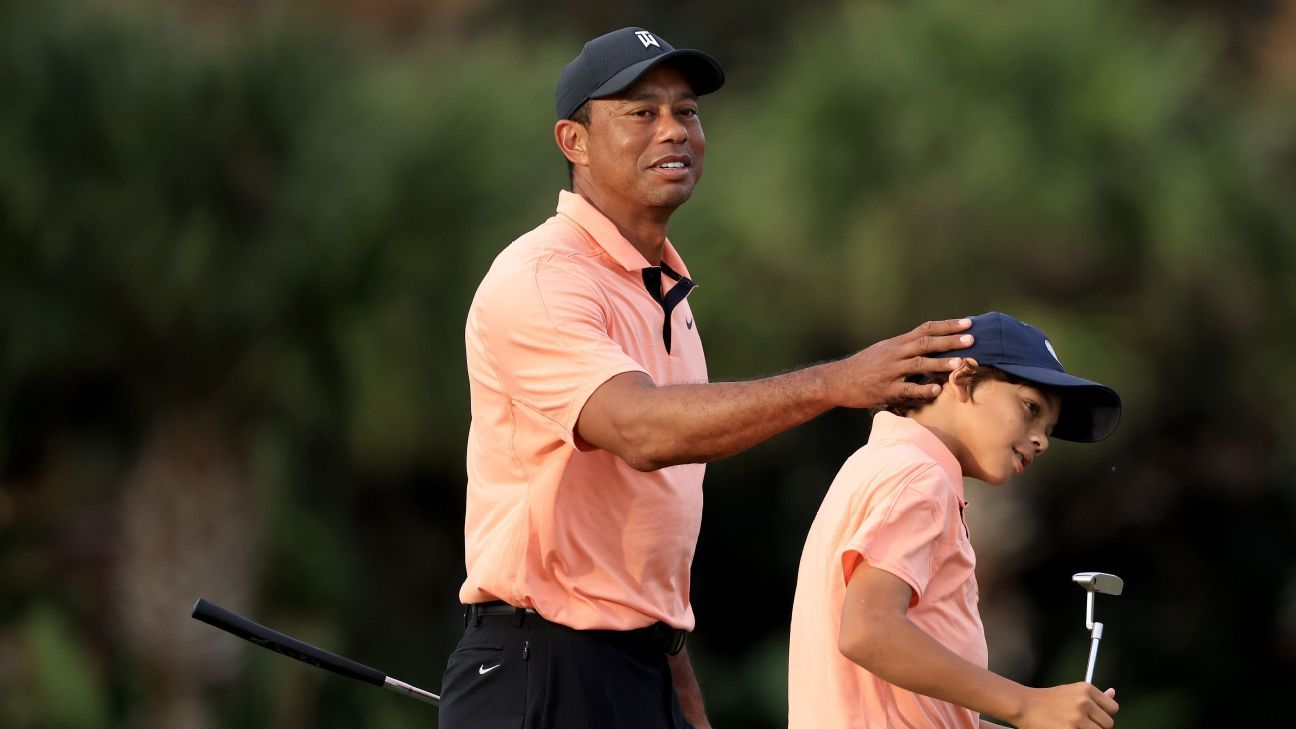 ORLANDO, Fla. — Tiger Woods knows the challenges he faces, understands the physical limitations that will hamper him and realizes that this week at the PNC Championship is just one small step — however painful — on his way back from a serious car crash.

All of that perspective served him well as he played his first competitive round of golf in a year in what is considered an offseason family event for major champions.

Playing with his son, Charlie, for the second straight year — “Charlie’s going to be carrying you guys I guess,” Justin Thomas quipped on the first hole — Woods showed flashes of the 15-time major champion but plenty of reminders of the long journey he faces.

“It’s frustrating when I don’t hit the ball as far as I know that I can and the shots that I see don’t come off the way I want,” Woods said after he and Charlie combined for a scramble score of 10-under-par 62 at the Ritz-Carlton Golf Club. “By the old numbers, I don’t have endurance. I haven’t played. This is, what, my fourth, [fifth] round of the entire year. I don’t have any golf endurance.

“It’s tiring out there, so it was a slow day. But that’s something that — if I want to compete out here at the [PGA] Tour level — I’m going to have to get the endurance back and hit thousands upon thousands of golf balls. Just takes time.”

Woods, who turns 46 on Dec. 30, was in no way upset or discouraged. If anything, he appeared to enjoy the day: the needling with Thomas and his dad, Mike; the applause from spectators who were keen to welcome him back. Among those in attendance were Woods’ daughter and Charlie’s sister, Sam; his girlfriend, Erica; friends; and players such as John Cook and Arjun Atwal. Ian Poulter, who lives in Orlando, was in the gallery with his son, Joshua, who was just as eager to watch Charlie as he was Tiger.

The competitive side of Woods showed strongly afterward when he noted that a goal was to not make a bogey; he and Charlie made one in each round last year on their way to shooting 62s each day. This 62 came with a clean card and trailed leaders Stewart Cink and his son, Reagan, by 3 strokes. The Woodses are in a five-way tie for fifth.

Charlie, 12, hit a number of good tee shots to spare his dad the trouble, and it was clear as the day wore on that Woods’ walking became more labored. In the Feb. 23 car crash that occurred in Southern California, Woods suffered multiple fractures to his right leg and numerous injuries to his foot and ankle. He was hospitalized for three weeks, and it took months before he could walk unaided.

“I wish I could have walked with him and been with him every step like I was last year,” Woods said. “Physically I’m unable to do that. It was different trying to drive the cart slower with him and talk to him and make sure we were present and we’re still a team and we’re still doing it all together.

“It’s a little harder when I’m in a cart moving around a little bit or trying to get through the galleries. The guys are extremely respectful and great. So supportive, but again, it’s totally different than walking step by step. Unfortunately, it’s a reality that we just can’t experience this year.”

Woods said there were only three shots he hit that would be in line with what he’s accustomed to: a 220-yard 4-iron behind the hole on the par-5 third; a good drive at the 14th; and a “smoked” 7-iron at the par-3 17th. His caddie, Joe LaCava, said the 7-iron traveled about 185 yards and was one of his more impressive shots.

“He’s maybe a club to a half-club off,” LaCava said. “It’s really pretty impressive, though, when you think about it.”

Thomas, who won the tournament with his father last year, was determined to not let Woods outdrive him — something that occurred on the 11th hole.

“He really didn’t need to say anything,” Thomas joked. “I was just so embarrassed that he hit it past me. That was enough.”

Thomas, who won the Players Championship earlier this year for his 14th PGA Tour victory, has probably spent more time with Woods of late than anyone. He’s well aware of the obstacles that Woods faces. But he saw a lot of positives in his game.

“I was so impressed by the speed that he had and the shots he was hitting,” Thomas said. “At least from my perspective, it looked like a lot of the moves and everything were there. If anything a little short, which naturally you would think he’s not going to hit it as far.

“But man, that 4-iron he hit into 3 today, that was just ridiculous. I looked at him as soon as he sat in the cart, he just kind of looked at me and smiles and I knew exactly that that’s the kind of shots that he hits when he’s healthy.”