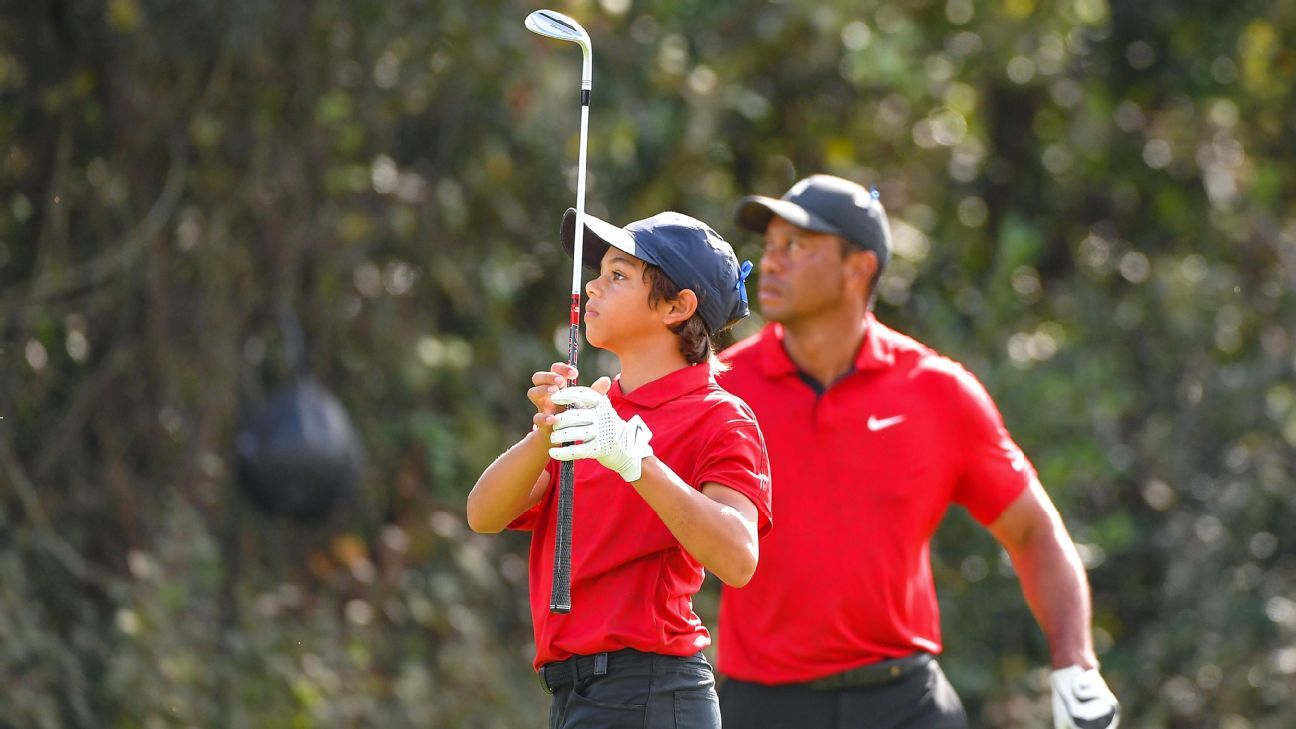 ORLANDO, Fla. — Tiger Woods accomplished both of his goals this weekend at the PNC Championship — having fun with his son, Charlie, and managing to play the scramble format of the event without making a bogey.

But along the way, the old competitive fire burned bright as Woods not only played remarkably well — with a good bit of help from his 12-year-old son — but got into contention on the strength of 11 consecutive birdies.

The streak ended on the par-5 18th hole when — knowing they likely needed an eagle to have any chance at the win — both Tiger and Charlie chipped past the hole and were unable to make the putt.

John Daly and his son, John Daly II, captured the 36-hole competition Sunday with a final-round 57 to clip the Woods team by 2 shots. They finished at 27 under for the tournament, breaking by 1 stroke the tournament mark set by Davis Love III and his son three years ago.

Daly, the two-time major champion who last year was diagnosed with bladder cancer, showed some of his old prowess along with some excellent golf from his son, who plays college golf at the University of Arkansas.

Tiger and Charlie also combined to shoot 15-under 57, making 13 birdies, an eagle and four pars, to finish second, a shot ahead of Justin Thomas and his dad, Mike, and Stewart Cink and his son, Reagan.

“We got on a nice heater; Charlie was hitting the ball unbelievable,” said Woods, who acknowledged that the intensity ramped up as the day wore on. “It [winning] would have had a special meaning in my heart for sure, there’s no doubt about that. And it still does.

“The fact that I’m able to have this opportunity this year, even a couple weeks ago we didn’t really know whether or not I would be doing this, but here we are. And we had just the best time ever, and I just wish I could have walked down the fairways with him and been side by side with him the entire time like we were last year.”

Woods did walk the final 200-plus yards to the 18th hole, but it was clear throughout the weekend that the right leg and foot that were badly injured in the Feb. 23 car crash gave him issues the more he played.

Although he had a golf cart, there is still a good amount of walking to be done, and Woods labored at times — although it didn’t seem to impact his swing very often. There were at least two instances Sunday when Woods winced after a tee shot, but there were plenty of other good moments and impressive shots that will make many wonder how close he is to returning.

Matt Kuchar, who played with Woods in the final round along with his son, Cam, came away gushing about Woods’ play.

“Still has speed, irons are spectacular,” he said. “Pin high every time. It was awesome,” he said.

Kuchar suggested Woods’ game was at PGA Tour level now, but Woods quickly shot that down.

“I totally disagree,” Woods said. “I’m not at that level. I can’t compete against these guys right now, no. It’s going to take a lot of work to get to where I can feel I can compete with these guys and be at a high level.”

Woods’ game seemed to get better as the weekend wore on, despite the obvious fatigue from which he was suffering. He lamented his inability to hit a lot of the shots required under duress, but we’re also talking about someone who had played just a handful of rounds of golf prior to this tournament and was likely not hitting many balls as recently as a month ago.

“I like competing,” he said. “I’m not going to play a full schedule ever again. I’m going to have to pick and choose what events, and even then, my body might not cooperate with that.

“So I don’t know how many events I’m going to be playing in. And it’s going to be up to training sessions, practice sessions, recovery tactics, all those different things to be able to do this again because it didn’t look good there for a while about it.”