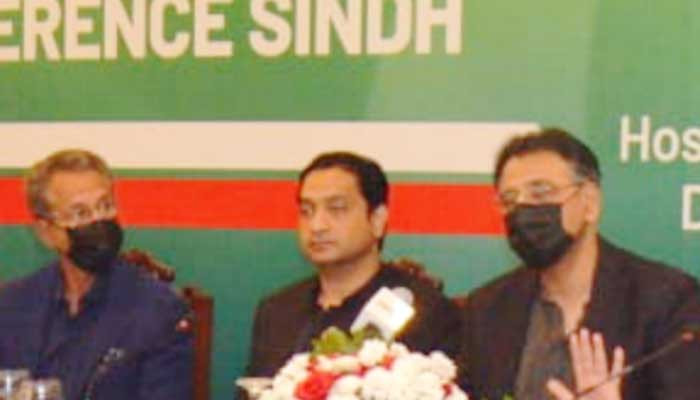 KARACHI: Leaders of various political parties at ‘all stakeholder conference’, organised by the Pakistan Tehreek-e-Insaf (PTI) Karachi chapter, unanimously rejected the local bodies act passed with new amendments by the Sindh government, saying that the local government law of 2013 and the current amendment law were against the Constitution’s Article 140-A, so the Sindh government should immediately withdraw it.

The resolution adopted by the participants also demanded to hold ‘direct election for the mayor’, hand over the Karachi Water and Sewerage Board (KWSB), Sindh Building Control Authority (SBCA), Karachi Development Authority (KDA), solid waste management boards and other departments to the head of the elected council and announce the Provincial Finance Commission (PFC) award on the lines of National Finance Commission (NFC).

They also agreed to launch a joint struggle for an empowered local government system for the city. PTI Karachi president and MPA Khurram Sher Zaman, who presided over the conference, thanked all the participants and said all the stakeholders in the multi-party conference (MPC) unanimously expressed their lack of confidence in the PPP government.

Federal Minister for Planning, Development and Special Initiatives Asad Umar, while addressing the conference, said that the voice of the residents living in Karachi should also be heard while making local government legislations.

He said despite his criticism of the Sindh government, the PTI was ready to talk to the Sindh CM to solve the people’s problems, adding that however, the party was not begging from the Sindh CM. He said that empowering the provinces alone will not solve the problems unless the powers are given at the lower levels and the problems of the cities will not be solved until the local governments are empowered.

Criticising the Sindh government, the federal minister said that Murad Ali Shah had not fulfilled his promise of devolving powers at the lower level. “Time has come for Sindh to take important decisions,” he added.

The Muttahida Qaumi Movement-Pakistan’s (MQM-P) leader and former mayor Karachi Waseem Akhtar said that the city had paid over Rs309bn in taxes to Sindh, adding that despite that it has always been ignored.

He said that in countries around the world, the mayors have all the rights and authority to carry out development work in the cities. “The chief minister used to give me a lollipop every time I asked to meet him,” he alleged, adding that: “He did not let me develop Nehr-e-Khayyam. If he wanted to do anything well, he would have already done that in Larkana or Nawabshah.”

The former mayor said the PPP government receives Rs1,200bn per annum to develop the province. “Will anyone ask them where these Rs1,200bn have been spent” he asked. Grand Democratic Alliance’s (GDA) leader Sardar Abdul Rahim said that without empowering the mayor, the civic issues of the cities cannot be solved. “The bill has also affected the district governments in Dadu, Tharparkar and Larkana, where there is no vaccination of dog bite available in the local hospitals,” he added.

The 14 political parties that attended the MPC organised by the Muttahida Qaumi Movement-Pakistan (MQM-P) on Saturday rejected the amendment in the recently passed bill.