To be the man, Charles Oliveira needs to beat the man, Dustin Poirier


It is true, the UFC’s lightweight division has moved on from Khabib Nurmagomedov, as hard as that has been.

It’s been more than a year since Nurmagomedov’s sudden retirement, and the UFC crowned a new undisputed champion, Charles Oliveira, in May. Nurmagomedov remains happily retired, and there is no indication he will ever come back. So, yes, the division has moved on — to an extent.

Why hasn’t the 155-pound division moved on entirely into a new chapter? There is still one loose end to tie up. And that involves Dustin Poirier.

The moment it became clear that Nurmagomedov was truly exiting the sport undefeated, it was nearly universally agreed on that Poirier was the best remaining lightweight in the world. Poirier is a former interim champion with 20 wins inside the Octagon. He is 8-1 in his past nine fights, with the only loss coming to Nurmagomedov in 2019.

The UFC acknowledged Poirier’s position in the division earlier this year when it offered him a choice between a lightweight title fight and a lucrative trilogy match against Conor McGregor. Poirier opted to take the July money fight first, so the UFC moved on with a title bout between Oliveira and Michael Chandler.

Oliveira won, and in impressive fashion. And with a winning streak of nine, he is the division’s champ. But he is not yet viewed as the best. That is still Poirier.

Which brings us to Saturday’s UFC 269 main event title fight. Both men hold something the other wants. Poirier has never been an undisputed UFC champion. It is the one box he has failed to check off in his career. Oliveira, meanwhile, has the hardware but not the status. His road to “best lightweight in the world” goes through Poirier.

This weekend’s co-main event is also a championship bout. Two-division champ Amanda Nunes will defend her bantamweight title against Julianna Peña. But Nunes is a huge favorite, leaving much of the focus on the headline bout.

The 155-pound matchup is not being promoted as “Champ vs. Champ,” as there is no title belt around Poirier’s waist. But the reality is that there might as well be one there. Arguably, no title fight in the history of the UFC has featured two men as proven as Oliveira and Poirier, with a combined 39 wins — 30 finishes — in the UFC.

Check out the weigh-in and stare down for the main event at UFC 269 between Dustin Poirier and Charles Oliveira.

Oliveira vs. Poirier by the numbers

30: Combined UFC finishes (Oliveira 17, Poirier 13), the most for two opponents in a fight. 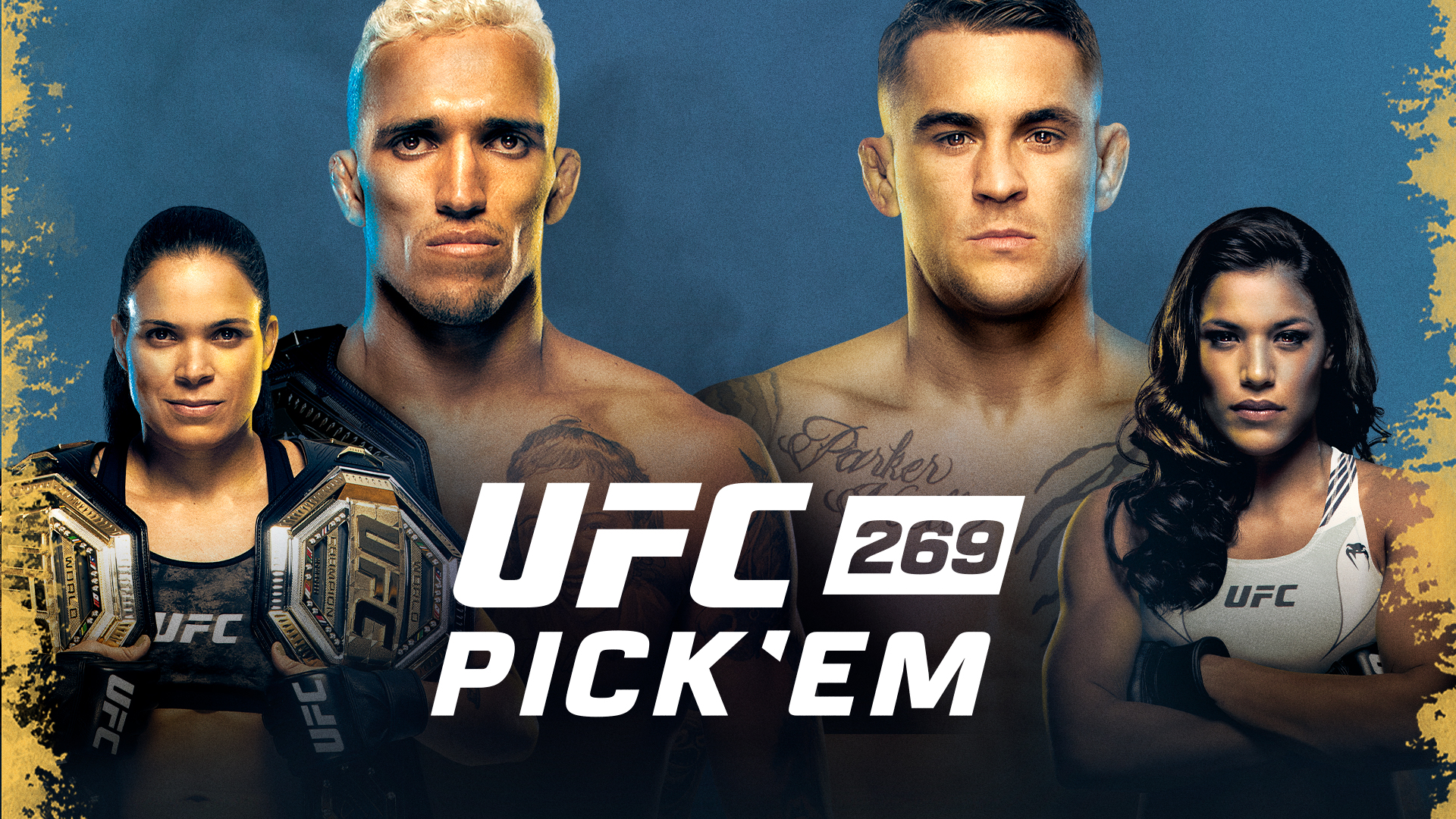 “Can Oliveira get Dustin down?” said Sayif Saud, coach at Fortis MMA. “Khabib Nurmagomedov showed when he took Dustin down, he controlled him. Not everyone is Khabib, but Oliveira destroyed Tony Ferguson on the ground, and no one had done that before. So, you can’t take that away from him. If it turns out Oliveira can take Dustin down, then that creates a lot of chances for him because his jiu-jitsu is just so good.”

Check out how Saud and other experts break down the main event and predict a winner.

Bantamweight and featherweight champion Amanda Nunes shares how she’s not afraid to knock out Julianna Peña at UFC 269.

Nunes vs. Peña by the numbers

1,981: Days it will have been, on fight night, since Nunes won the bantamweight championship on July 9, 2016. That is the fourth-longest title reign in UFC history.

.933: UFC winning percentage for Nunes, who is 14-1 inside the Octagon with an active 12-fight winning streak. The only fighters with a better winning percentage through 15 UFC fights are Kamaru Usman and Anderson Silva, both at 15-0.

9: Title fight wins by Nunes, who is among only four fighters to hold two UFC championships simultaneously. With a victory at UFC 269, Nunes would join Silva, Jon Jones, St-Pierre and Demetrious Johnson as the only fighters to win 10 title fights.

Monday through Friday, host Pablo Torre brings you an inside look at the most interesting stories at ESPN, as told by the top reporters and insiders on the planet. Listen

“It’s 1A and 1B when you talk about the best female fighters in the world right now: Nunes and Valentina Shevchenko,” said Eric Nicksick, coach at Xtreme Couture. “I think Amanda can pretty much do whatever she wants in this fight. If you look at where Peña’s best attributes are, it’s on the ground when she gets topside. So, Amanda needs to keep the fight on the feet and use her Muay Thai. Keep moving, use lateral angles so she’s not just standing in front of Peña, and work those pull counters, get Peña to miss big and then attack on an angle.”

Check out how Nicksick and other experts break down the main event and predict a winner.

Pedro Munhoz vs. Dominick Cruz: In each of his past four fights, win or lose, Munhoz has gone to a decision. I don’t see the result being much different against Cruz, who has had four of his past five fights go the distance. Cruz is a high-volume striker but doesn’t carry a ton of power, and defensively he is very difficult to put away. I think Munhoz gets the win here, using calf kicks to slow Cruz down and then landing the more damaging shots. If Munhoz can get the fight to the ground, he will have the advantage there as well. But expect it to go to the judges. Pick: Fight goes the distance, at -175.

For more tips from Parker and Reed Kuhn on this fight card’s best bets, go here.

How to watch the fights

Watch the PPV and all other fights on ESPN+. Get ESPN+ here.

Purchased the fight on your phone and want to stream on your TV? Find out how here.