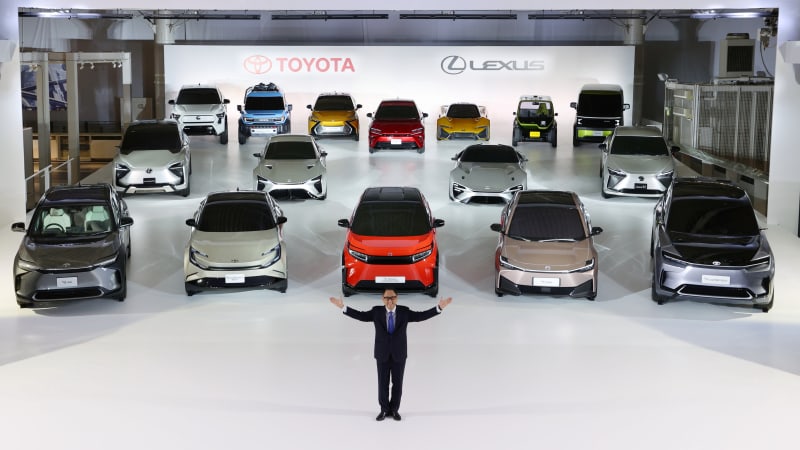 Toyota has outlined its plans for electric cars through 2030 in a big way: It showed a whole bunch of full-size concept cars for both Toyota and Lexus. They aren’t outlandish concepts either, and the company says they are previewing future models, of which there will be many. Toyota said it will launch 30 electric models between now and 2030, with a goal of reaching 3.5 million global EV sales by that time.

There will be a wide variety of models, as represented by these concepts, with the idea being that the successful models will help determine the brand’s direction. The company also announced that it has expanded its investment in battery technology by a little over $4.4 billion, to over $17.6 billion. Toyota plans an overall spend of $70 billion to electrify its lineup.

We’re covering Lexus in a separate post and focusing on the Toyota cars, here, and there were two sets of Toyota concepts shown. One was a very large and diverse group called the Lifestyle cars, and the other was a smaller, more restrained set of bZ models, taking after the bZ4X that’s headed to dealers soon. Of the two sets, the Lifestyle cars particularly caught our eye.

Among them is the Toyota Pickup EV (almost all of the concepts have bare-bones names). It absolutely looks like a next-generation Toyota Tacoma. The styling is clearly based on the new Tundra with the swept-back headlights combined with grille openings, the long nose, the chunky fender flares, the thick rear pillar and contrasting roof. But the size is much smaller like a current Tacoma. Of course, the giveaway that it’s an EV is the blanked-out grille, but it looks like there could easily be an open grille for an internal combustion engine. So as a potential preview of a new Tacoma, and the indication that the next Tacoma could have an electric option, it’s extremely interesting.

The Lifestyle group had a couple of other standouts. The Sports EV looks superb. It also has mid-engine sports car proportions. We wonder if it could be a spiritual successor to the MR-2. Then there’s the Compact Cruiser EV, which looks like a tiny, electrified FJ Cruiser with its boxy, rugged design. Some of the other Lifestyle models (the Mid Box, Micro Box and e-Palette) are examples of more commercial models for delivery, public transit and car sharing needs. And there were also the Crossover EV and Small SUEV, both of which were a bit uninspiring compared to the others.

The bZ cars are meant to expand on the bZ4X to create a small sub-brand. A subcompact bZ Small Crossover, a coupe-like bZ Compact SUV, a bZ Large SUV and a bZ SDN sedan were among the group. We rather like the Compact SUV’s sleek fastback roof and the Small Crossover’s aggressive shape. The Large SUV will be a three-row model, something that has serious sales potential considering the size of the three-row SUV segment.