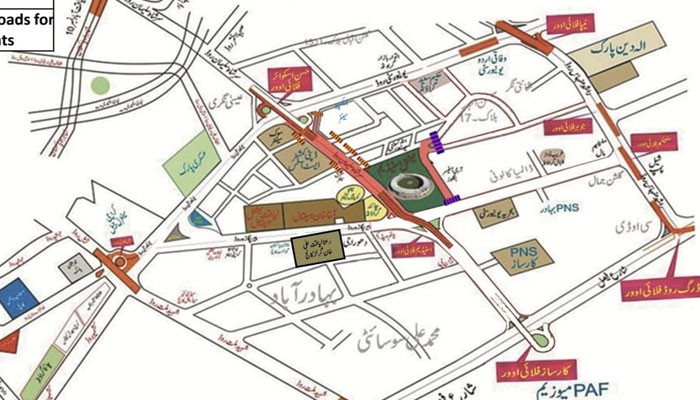 KARACHI: Traffic Police Monday released the traffic plan for the T20 and ODI series scheduled to be played between Pakistan and West Indies at the National Stadium in Karachi from December 13-22.

Both the teams will play three T20Is and an equal number of ODIs, all at the National Stadium in Karachi, before the visitors depart on December 23.

In a bid to ensure foolproof security of the players and to avoid any untoward incident, the traffic police in a statement said that Hasan Square flyover and the Sir Shah Muhammad Suleman Road from Hasan Square to the National Stadium will remain closed for all kinds of traffic during the matches.

Commuters are requested to use alternate routes to avoid any inconvenience, said the traffic police.

As per the plan, all kinds of traffic heading to Karsaz from Gharibabad will not be allowed to use Hasan Square flyover. The vehicles could reach their destination by using New Town or NEPA roads.

Vehicles heading to Karsaz from the University Road will be diverted to New Town to reach their destination.

Traffic Police staff will be present to assist /help them,” added the statement.

Earlier, Karachi police had done their homework and chalked out a comprehensive security plan, ahead of the West India-Pakistan home series scheduled to begin from December 13.

To take stock of the security situation and prepare for it in advance, a meeting had been presided over by Additional Inspector General Imran Yaqoob Minhas at the Sindh Boys Scouts Auditorium.

DIG Security and Emergency Services Division Maqsood Ahmed had given a briefing on the strict security measures taken for the tour.

A total of 46 DSPs, including 13 senior officers of the Karachi police, 315 NGOs, 3,822 constables ad head constables, 50 women police personnel, 500 personnel of the Rapid Response Force and 889 commandos of the Special Security Unit would perform security duties along with the Karachi traffic police during the matches at National Stadium, routes, practice grounds, parking areas, hotels and other areas.

Special Branch personnel in plainclothes will be deployed at the National Stadium in Karachi and the hotels for the teams’ security. A Special Weapons and Tactics team would be on standby to respond to emergencies.