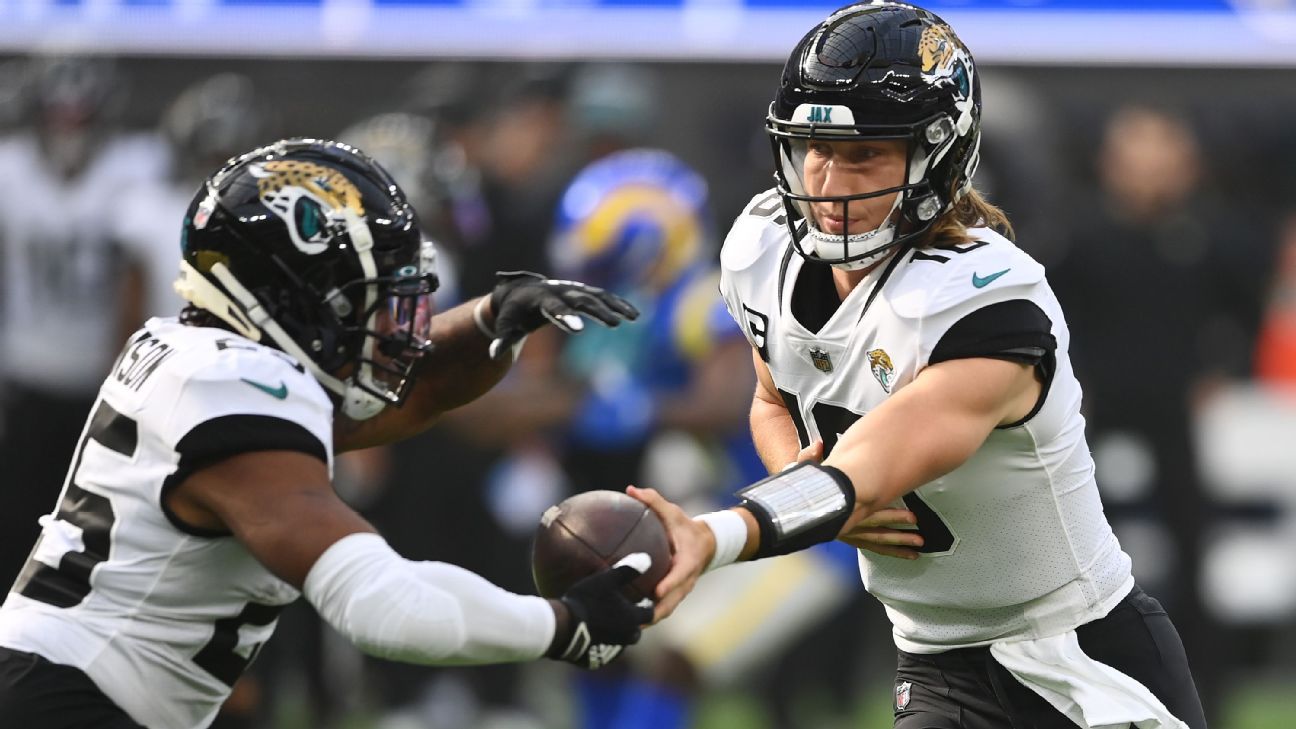 JACKSONVILLE, Fla. — Jacksonville Jaguars running back James Robinson has one teammate in his corner — and it’s probably the most important one.

Quarterback Trevor Lawrence said Wednesday that he made it clear to the Jaguars’ coaching staff that Robinson needs to be on the field as much as possible. The second-year player is the team’s best offensive player, and having him off the field for 16 and 20 consecutive plays is hurting the Jags’ chances to move the ball and score points.

“In my eyes, obviously, I’m the one that’s out, see all the pieces moving, I see the whole picture,” Lawrence said. “Bottom line is James is one of our best players and he’s got to be on the field and we addressed it, and I feel like we’re in a good spot and the whole team, we’re good. Whatever may have happened, I honestly don’t even know everything that went into it.

“I’m playing the game and stuff happens on the sideline with coaching decisions. I don’t really get into that, but I know and I voiced my opinion: James is one of our best players and he’s got to be in the game. I think we’re all on the same page, so there’s no confusion there. We’re going to move forward. I know James is a hell of a player, so I want him out there.”

Robinson was benched for 16 plays after fumbling against Atlanta on Nov. 28 and for 20 plays after fumbling against the Los Angeles Rams last Sunday. Jaguars coach Urban Meyer said he wasn’t aware of how long Robinson was held out of the games and that he doesn’t micromanage his assistant coaches. He said the decision on when to play Robinson belonged to running backs coach Bernie Parmalee.

“You bench yourself,” Meyer said. “If you lay the ball on the ground and you come out for a few plays, and then it’s up to the position coach and whatever to put you back in whenever that’s time. And that’s not [just] James. That’s whomever. When the ball goes on the ground, you come [out].”

What caused confusion is the fact that backup Carlos Hyde fumbled against the Rams and was back on the field during the Jaguars’ next drive, which came after Robinson missed three series because of his fumble. Robinson is clearly the better back of the two — he has rushed for 678 yards and seven TDs and is averaging 4.9 yards per carry compared to Hyde’s 251 yards, 1 TD, and 3.5 yards per carry — and the offense is definitely better with him on the field.

Muddling things even more is the fact Meyer said after the Falcons game that Robinson’s absence was related to the heel and knee injuries he suffered against Seattle on Oct. 31. Robinson missed the following game — Jacksonville’s improbable 9-6 victory over Buffalo — but he didn’t have the same burst through the hole when he returned the week after.

Robinson has gradually improved and said earlier this week that going into last Sunday’s game he felt the best he had since getting hurt. But Meyer said after the Rams game that Robinson was still battling those injuries — and yet the Jaguars had him on the field and carrying the ball three times in the final two minutes of a game they were losing 37-7.

Meyer said this week that he’ll be more involved in game-day personnel decisions going forward, especially at running back and receiver.