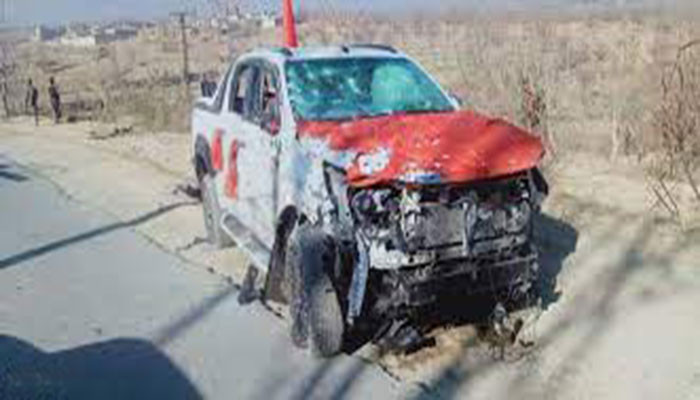 KHAR: Two persons were martyred and six others sustained injuries in a suicide bomb blast in Kamarsar area in Loy Mamond tehsil in Bajaur tribal district on Sunday.

District Police Officer Abdul Samad said that a vehicle of the Awami National Party (ANP) was carrying voters to the polling station to cast votes in the first-ever local government elections in Kamarsar area in Loy Mamond tehsil of Bajaur district.

Talking to reporters, he said that the vehicle was targetted by a suicide bomber at 12:45pm.

As a result, two persons identified as Liaqat Khan and Muhammad Rahman martyred on the spot while six others sustained injuries in the explosion.

The injured were identified as Umair, Mashooq, Younas, Zaid, Imran and Saad, who were immediately taken to the District Headquarters Hospital, Khar, for medical treatment.

One of the injured was stated to be in a precarious condition, who was referred to a hospital in Peshawar.

The vehicle was also damaged in the explosion.

The locals said that the bomb blast was so loud that it was heard far and wide, sending a wave of fear and panic among the residents.

No individual or militant group has claimed responsibility for the subversive act in the district.

Meanwhile, provincial Minister for Zakat and Social Welfare Anwar Zeb Khan visited the hospital and inquired after the health of the injured.

He prayed for the early recovery of the injured and on behalf of the provincial government announced a compensation of Rs0.5 million for the martyred and Rs0.1 each for the injured.