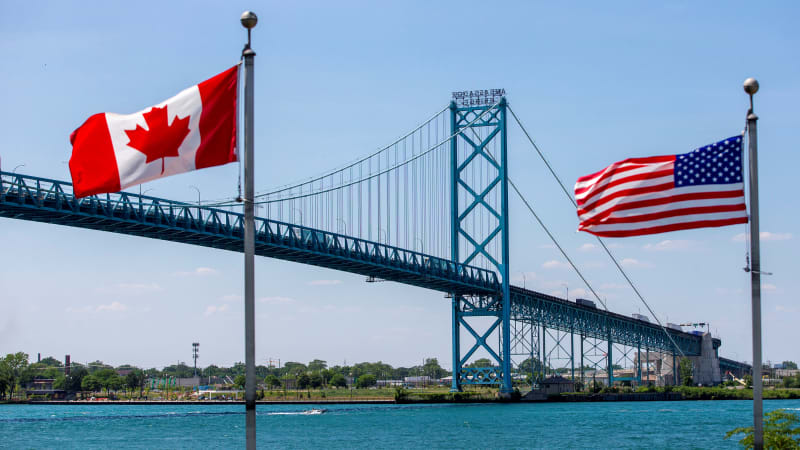 Drivers demanding an end to Canada’s COVID-19 vaccine mandates for cross-border traffic — which is mirrored by a similar U.S. requirement for truckers — began blocking the streets of Canada’s capital, Ottawa, on Jan. 28. Since Sunday night, police have started slowly taking back control, seizing thousands of liters of fuel and removing an oil tanker truck.

Trucks started blocking traffic at the Ambassador Bridge, located between Windsor and Detroit, and Lake Erie and Lake Huron, late on Monday. Canada’s Border Services Agency said on Tuesday that the bridge was closed, but police later tweeted that U.S.-bound lanes were now open.

Canada sends 75% of its goods exports to the United States, and the bridge usually handles around 8,000 trucks a day.

“We got sent here to send a message and the message isn’t getting through,” Ottawa protest spokesman Tom Marazzo told reporters on Monday night.

Canadian Prime Minister Justin Trudeau, appeared in public on Monday for the first time in more than a week after being infected with COVID-19, saying the protest had to stop.

Trudeau was due to return to parliament on Tuesday to face opposition legislators demanding he do more to end what one aide called a “national humiliation.”

He has denounced the demonstrators’ tactics.

“Individuals are trying to blockade our economy, our democracy, and our fellow citizens’ daily lives,” he told an emergency debate in the House of Commons on Monday night. “It has to stop.”

“This is a story of a country that got through this pandemic by being united and a few people shouting and waving swastikas does not define who Canadians are,” he said.

Canadians have largely followed government’s health measures, and nearly 79% of the eligible population has taken two doses of the vaccine. But recent polls have shown frustrations against restrictions are growing.

Police in Canada’s capital said on Monday they had seized thousands of liters of fuel and removed an oil tanker as part of a crackdown to end an 11-day protest against COVID-19 measures, adding truck and protester numbers had fallen significantly. A well-organized supply chain — including portable saunas, a community kitchen and bouncy castles for children — has sustained the protesters. It has relied partly on funding from sympathizers in the United States, police said. Former U.S. President Donald Trump and Tesla CEO Elon Musk have praised the truckers.

Over the weekend, protests spilled over into other large Canadian cities, including the financial capital Toronto, and were met with counter demonstrations.

The protest, which has gridlocked Ottawa, has been largely peaceful, but ear-splitting horn-blaring by protesters saw a court on Monday grant an interim injunction preventing people from sounding horns in the city’s downtown. The injunction was part of a class-action lawsuit brought on behalf of downtown Ottawa residents, some of whom have said they feel unsafe in their own neighborhood.

There was also evidence of pushback from residents. Signs in the ground-floor windows of an apartment building near the protest site said: “GO HOME MORONS” and “VACCINES SAVE LIVES.”