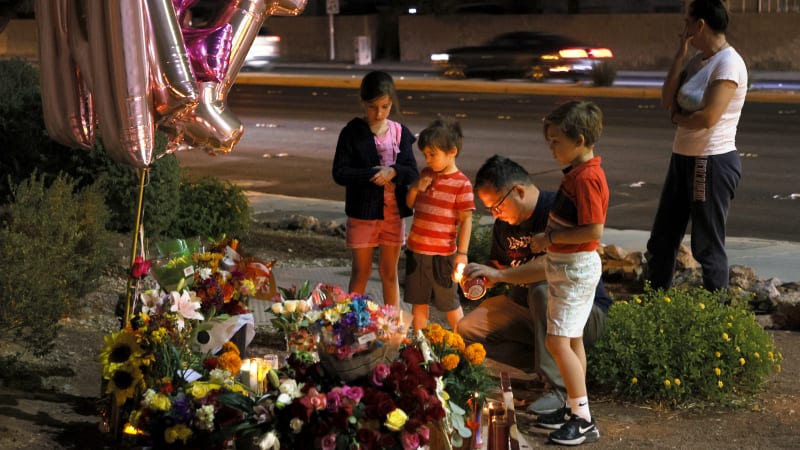 Friends of Tina Tintor light a candle at a roadside memorial where she and her dog Max died in November. Police say former Las Vegas Raiders player Henry Ruggs was driving his Corvette at up to 156 mph with a blood-alcohol level twice the legal limit when he hit the back of Tintor’s Toyota RAV4 at 120 mph. (Getty Images)

WASHINGTON — The number of U.S. traffic deaths surged in the first nine months of 2021 to 31,720, the government reported Tuesday, keeping up a record pace of increased dangerous driving during the coronavirus pandemic.

The estimated figure of people dying in motor vehicle crashes from January to September 2021 was 12% higher than the same period in 2020. That represents the highest percentage increase over a nine-month period since the Transportation Department began recording fatal crash data in 1975.

Federal data from the department’s National Highway Traffic Safety Administration showed that traffic fatalities increased during the nine-month period in 38 states, led by those in the West and South such as Idaho, Nevada and Texas, and was flat in two states. The numbers declined in 10 states and the District of Columbia.

Transportation Secretary Pete Buttigieg has pledged help and released a new national strategy last week aimed at reversing the trend, which he calls a crisis. He told The Associated Press last week that his department over the next two years will provide federal guidance as well as billions in grants under President Joe Biden’s new infrastructure law to spur states and localities to lower speed limits and embrace safer road design such as dedicated bike and bus lanes, better lighting and crosswalks. The strategy also urges the use of speed cameras, which the department says could provide more equitable enforcement than police traffic stops.

Buttigieg cited as well safety benefits under the infrastructure law by building out alternative modes of travel to cars such as rail and public transit, “if only because every other mode of transportation is safer.”

NHTSA also plans to move forward on rulemaking to require automatic emergency braking in all new passenger vehicles, and set new standards on car safety performance by emphasizing crash-avoidance features such as lane-keeping assistance, though no firm deadlines were set for action.

Traffic deaths began to spike in 2019. NHTSA has blamed reckless driving behavior for increases during the pandemic, citing behavioral research showing that speeding and traveling without a seatbelt have been higher. Before 2019, the number of fatalities had fallen for three straight years.

“People make mistakes, but human mistakes don’t always have to be lethal. In a well-designed system, safety measures make sure that human fallibility does not lead to human fatalities,” Buttigieg said Tuesday in a statement. “That’s what we will be doing for America’s roads with the National Roadway Safety Strategy and the safe system approach that it embraces.”

Jonathan Adkins, executive director of the Governors Highway Safety Association, which represents state safety offices, described the latest figures as a “nightmare” but said the Biden administration appears to be taking the right approach on broad safety fixes.