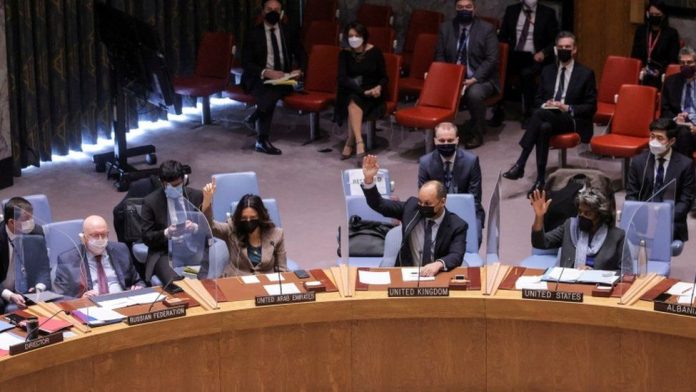 Russia and the United States clashed over Ukraine at the UN Security Council Monday, with Moscow’s representative accusing Washington of whipping up hysteria over the 100,000 Russian troops massed on its neighbor’s borders.
US ambassador to the United Nations, Linda Thomas-Greenfield, told the council during a special open session that a Russian invasion of Ukraine would threaten global security.
“Colleagues, the situation we’re facing in Europe is urgent and dangerous, and the stakes for Ukraine and for every UN member state could not be higher,” said Thomas-Greenfield, warning of “horrific” consequences if Russia attacks Ukraine. She further said “Russia’s actions strike at the very heart of the UN charter. This is as clear and consequential a threat to peace and security as anyone can imagine.”
But Russia’s ambassador to the UN Vassily Nebenzia rejected the allegations and said Washington was engaging “in hysterics” by calling the Council meeting on Ukraine. He said no Russian official had threatened to invade the former Soviet republic. The United States is “whipping up tensions and rhetoric and provoking escalation,” Nebenzia said.
Ukraine’s ambassador to the UN, Sergiy Kyslytsya, called for de-escalation so talks can resume over the conflict already ongoing inside Ukraine with pro-Moscow secessionists in the eastern Donbass region. “My president has re-iterated most recently that he’s ready to meet his Russian counterpart,” Kyslytsya told the Council.
“If Russia has any questions to Ukraine, it is better to meet and talk, not to bring troops to the Ukrainian borders and intimidate Ukrainian people,” he said.
Russia has repeatedly denied it poses a threat to Ukraine while demanding guarantees that Kyiv will not join the US-led NATO alliance and that the United States will not establish new military bases in ex-Soviet countries. Following the UNSC meeting, US Secretary of State Antony Blinken and his Russian counterpart, Sergei Lavrov, are scheduled to talk on Tuesday.