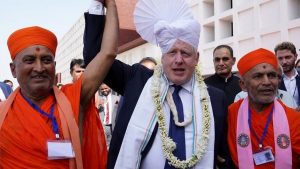 British Prime Minister, Boris Johnson, arrived in India on Thursday and began a two-day visit in Gujarat, the home state of his Indian counterpart, Narendra Modi. The UK’s Prime Minister pays a visit to India amid the Ukrainian conflict, as the West pushes India to adopt a strong stance against Russia. Boris hopes to entice India toward the West and wean the country off its dependence on Russian oil and arms as the war in Ukraine rages on.

“As we face threats to our peace and prosperity from autocratic states, it is vital that democracies and friends stick together,” Johnson told reporters.

India’s top oil firm, the Indian Oil Corporation, bought 3 million barrels of crude from Russia in March. Last week, US President Joe Biden asked Modi not to increase purchases of Russian oil.
New Delhi has made no firm commitments to Biden, and Indian foreign minister S Jaishankar highlighted Europe’s dependency on Russian oil. He said at a news conference in Washington last week that our total purchases for the month would be less than what Europe does in an afternoon.
Russia also remains India’s key defense partner, with the Kremlin exporting arms worth $6.6bn to New Delhi between 2016 and 2020.
Earlier, Mr. Johnson had also said the UK would support India to construct fighter jets, in an attempt to reduce the volume of weapons bought from Russia.
Aside from geopolitics, trade and investment announcements and collaborations in research and technology were also on Boris’s agenda. 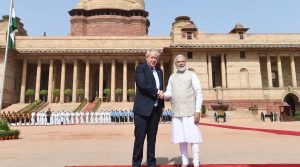 Meanwhile, British Prime Minister Boris Johnson met with his Indian counterpart Narendra Modi today. India’s foreign secretary, Harsh Vardhan Shringla said that Boris put no pressure on India over New Delhi’s position on Russia’s invasion of Ukraine. The two leaders announced at the joint press conference that India and the UK will co-develop a $100 million initiative to battle the issue of climate change by funding tech firms and start-ups. Mr. Johnson stated that he hoped for a post-Brexit free trade agreement to be reached by Diwali in October.

PM Boris, However, is being questioned more about his leadership and the lockdown parties. Mr. Johnson was fined last week for celebrating his birthday in his office in June 2020 while the COVID-19 lockdown was in effect. A probe has been launched over whether Johnson lied to the UK Parliament about breaking COVID-19 lockdown rules. The probe will look at whether Johnson knowingly deceived the United Kingdom’s Parliament, which is usually grounds for quitting if proven.

Previous articleHow to install IceScrum on Ubuntu Server 20.04
Next articleRare exchange of letters between North and South Korea despite escalating tensions