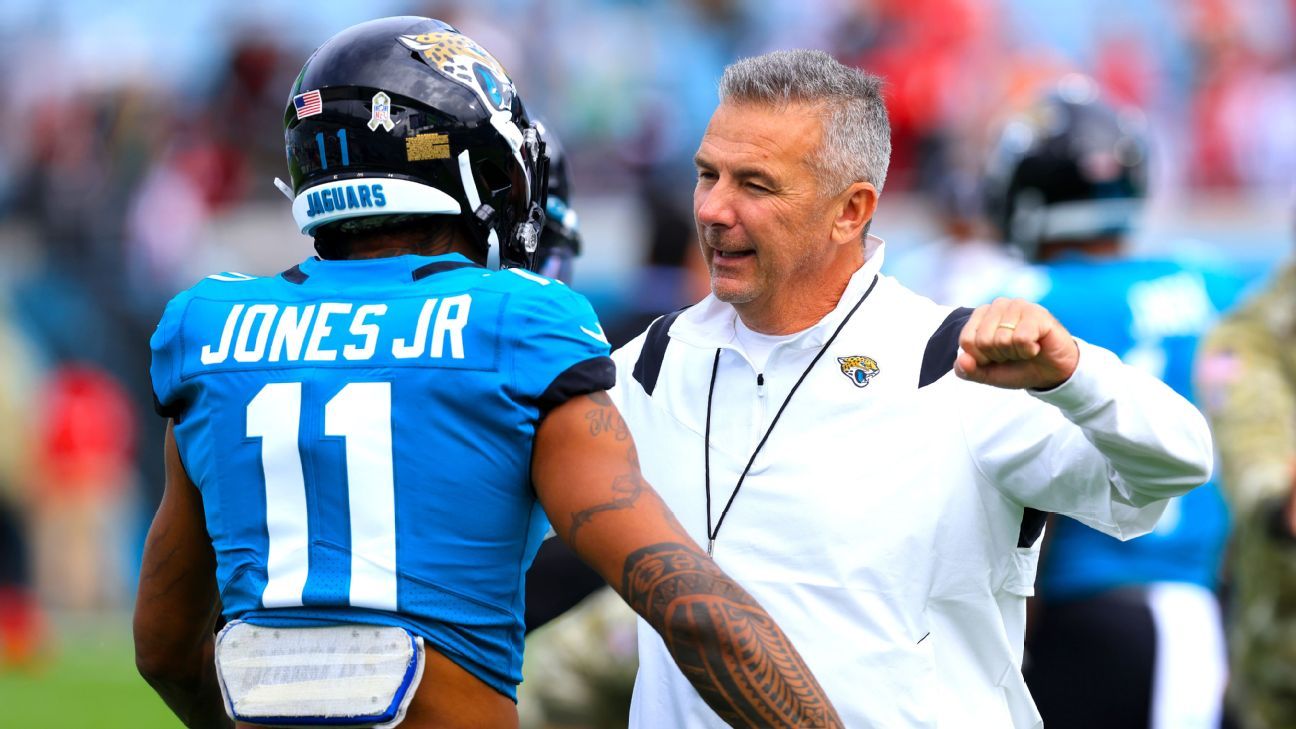 As tension builds amid the frustration of a 2-10 season, Jacksonville Jaguars owner Shad Khan plans to stay the course with coach Urban Meyer, sources told ESPN on Saturday.

Meyer again has come under scrutiny, with sources confirming an NFL Network report on Saturday that Jaguars wide receiver Marvin Jones recently had to be persuaded to return to the team facility after leaving in response to Meyer’s vocal criticisms of the wide receiver corps.

Jones, who stayed outside the team facility before eventually walking back in, also had a heated exchange with Meyer at practice after returning, sources confirmed to ESPN.

There has also been a public dispute about player usage, as franchise quarterback Trevor Lawrence advocated for the Jaguars to use running back James Robinson more. Robinson was on the sideline for lengthy stretches after fumbles over the past two games.

“In my eyes, obviously, I’m the one that’s out, see all the pieces moving, I see the whole picture,” Lawrence said Wednesday. “Bottom line is James is one of our best players and he’s got to be on the field.”

Meyer said Wednesday that he wasn’t aware of how long Robinson was held out of the games and that he doesn’t micromanage his assistant coaches, putting the decision on running backs coach Bernie Parmalee. Meyer added this week that he will be more involved in game-day personnel decisions going forward, especially at running back and receiver.

The conflicts are the latest in a tumultuous first season for Meyer, whose job status came into some question in October after two viral videos that emerged showing him with at least one woman who was not his wife at his restaurant in Columbus, Ohio. Meyer said he never planned to resign over the videos and supported Khan’s public rebuke of his actions.

“[Meyer] must regain our trust and respect,” Khan said after that incident. “That will require a personal commitment from Urban to everyone who supports, represents or plays for our team. I am confident he will deliver.”

The offseason also saw the Jaguars and Meyer fined for organized team activities violations and the hiring of director of sports performance Chris Doyle and his subsequent resignation stemming from accusations of racist remarks, belittling and bullying players during his time at Iowa.

The Jaguars are in their second four-game losing streak of the season entering Sunday’s game against the Tennessee Titans.

Meyer’s name had been a topic of speculation during the recent wave of college coaching vacancies — including at Notre Dame, which he once referred to as his “dream job” — but a source told ESPN that the coach remained committed to rebuilding the Jaguars.