The United States Representative Ilhan Omar has met with Pakistani leaders for the first time since a new coalition government took power in Islamabad following the dismissal of former Prime Minister Imran Khan. Omar met with President Arif Alvi at his office on Wednesday.
Ilhan is a Somali-born Muslim-American immigrant who represents Minnesota in the US House of Representatives. She began a five-day visit to Pakistan, by holding separate meetings with President Arif Alvi, Prime Minister Shehbaz Sharif, National Assembly Speaker Raja Pervaiz Ashraf, and State-Foreign Minister Hina Rabbani Khar. 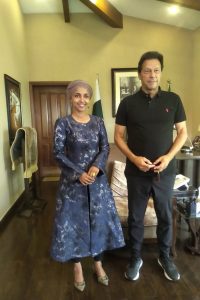 Omar also met former prime minister and Pakistan Tehreek-e-Insaf (PTI) Chairman Imran Khan at his Bani Gala residence. During the meetings, the Pakistan-US relations, Islamophobic incidents around the world, and other bilateral matters came under discussion.
Congresswoman Omar stressed that Pakistan and the US had huge potential to improve and strengthen their bilateral relations. She appreciated the role played by Pakistan against Islamophobia, particularly towards the adoption of a resolution on the issue at the United Nations.

President Alvi, while welcoming Congresswoman Omar at the Aiwan-e-Sadr, expressed the hope that the constructive engagements between Pakistan and the United States would promote peace and development in the region.
PM Shehbaz Sharif told Ilhan that Pakistan valued its ties with the US and sought to further strengthen bilateral cooperation based on mutual respect, trust, and equality. He also appreciated Ilhan’s role in US politics and expressed the hope that her visit would further deepen US-Pak relations. Shahbaz also highlighted the need for further enhancing bilateral cooperation, especially in the areas of trade and investment.

The prime minister highlighted the serious human rights situation in Indian Illegally-Occupied Jammu and Kashmir (IIOJK) and stressed the importance of peaceful resolution of the Kashmir dispute so that the region could make full use of its economic potential and promote social development. 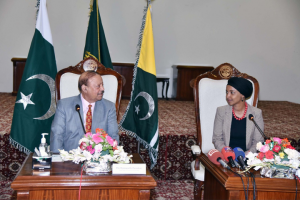 Ilhan Omar also paid a rare visit to Azad Jammu and Kashmir to gain first-hand information about the current human rights violations in Indian Illegally Occupied Jammu and Kashmir, saying that the issue should get more attention from the US. “For me, human rights have been a priority of my work, and you can’t fight for the right of others if you do not have the proper information,” she mentioned.
President Sultan said that Ilhan had been vocal about the issue of human rights violations and he greatly appreciated the dialogue.
US Congresswoman Ilhan Omar emphasized that the US valued its ties with Pakistan as both countries were partners in progress for the last seven decades, and assured the Pakistani top leadership that Washington would continue to support Islamabad in various fields.
Omar is visiting Pakistan from April 20 to 24, 2022. In addition to her meetings with the top leadership in Islamabad, she is visiting Lahore and Azad Jammu, and Kashmir to have a better understanding of the cultural, social, political, and economic prospects of Pakistan.