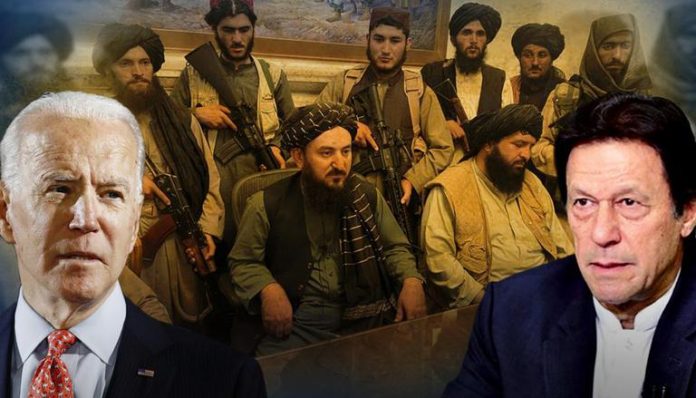 The Afghans have suffered the never-ending wars and unlawful interventions leading to perpetual instability in the region. Whether it’s a violation of international humanitarian laws, kidnapping, human/drug trafficking, violence, harassment, or abuse against women and children, The biggest challenge for the government is to maintain law and order in the country.

It’s worth noting that, as direct neighbours, Pakistan and Afghanistan share more than just a border, including culture, language, sports, food, and history. Since the 1980s, Pakistan has hosted millions of Afghan refugees. They established enterprises in Pakistan, attended colleges and universities there, and married Pakistani families, all of whom considered Pakistan to be their home. Pakistan continues to work with Afghanistan to build cordial and good neighbourly ties based on mutual respect for sovereignty and territorial integrity.

on the other hand, following Pakistan’s independence in 1947, the United States maintained diplomatic ties with the country. Pakistan and the United States have been cooperating closely on issues such as counter-terrorism, energy, trade, and investment. During the last two decades, the United States has been one of the country’s top investors, investing in goods, chemicals, energy, agriculture, business, and communications, among other things. Pakistan has been the target of propaganda since the withdrawal of US forces from Afghanistan. The US House of Representatives dropped all references to Pakistan from a bill that aimed to blame the country for everything that is happening in Afghanistan. This is a good step towards accepting Pakistan’s efforts in helping in maintaining peace and stability in the region knowing quite well that Pakistan has endured significant losses since joining the US-led global anti-terrorist war. Over 80,000 people were martyred, costing the economy $100 billion. However, anyone blaming Pakistan for its failure in Afghanistan is unjust.

Earlier, Prime Minister Imran Khan, while giving an interview to Russia today stated that Pakistan gave the greatest sacrifices in the Afghanistan war. No Pakistani was involved in 9/11 and Pakistan had nothing to do with that incident but Pakistan was a victim of this incident.

While talking to the BBC journalist, Stephen Jhon Sackur, Pakistan’s national security advisor Moeed Yusuf also discussed the impact the war in Afghanistan has had on Pakistan and said that the issues can be resolved through the dialogue.

Pakistan is genuinely worried that world leaders may soon forget about Afghanistan and leave the country on their own. At a recent speech in Islamabad, Prime Minister Imran Khan also discussed the horror that would rise if the international community failed to avert Afghanistan’s economic collapse and humanitarian crisis.

Pakistan still hopes that the war-torn country may come insight of the international community as well to cater to economic collapse and humanitarian crisis in the region. There are high hopes from the Organisation of Islamic Cooperation (OIC) that they must understand the gravity of the situation in Afghanistan. Although having a pleasant attitude toward one another can help encourage stability and development. Also, engaging in the dialogue and comprehending the underlying concerns can aid in border stability.