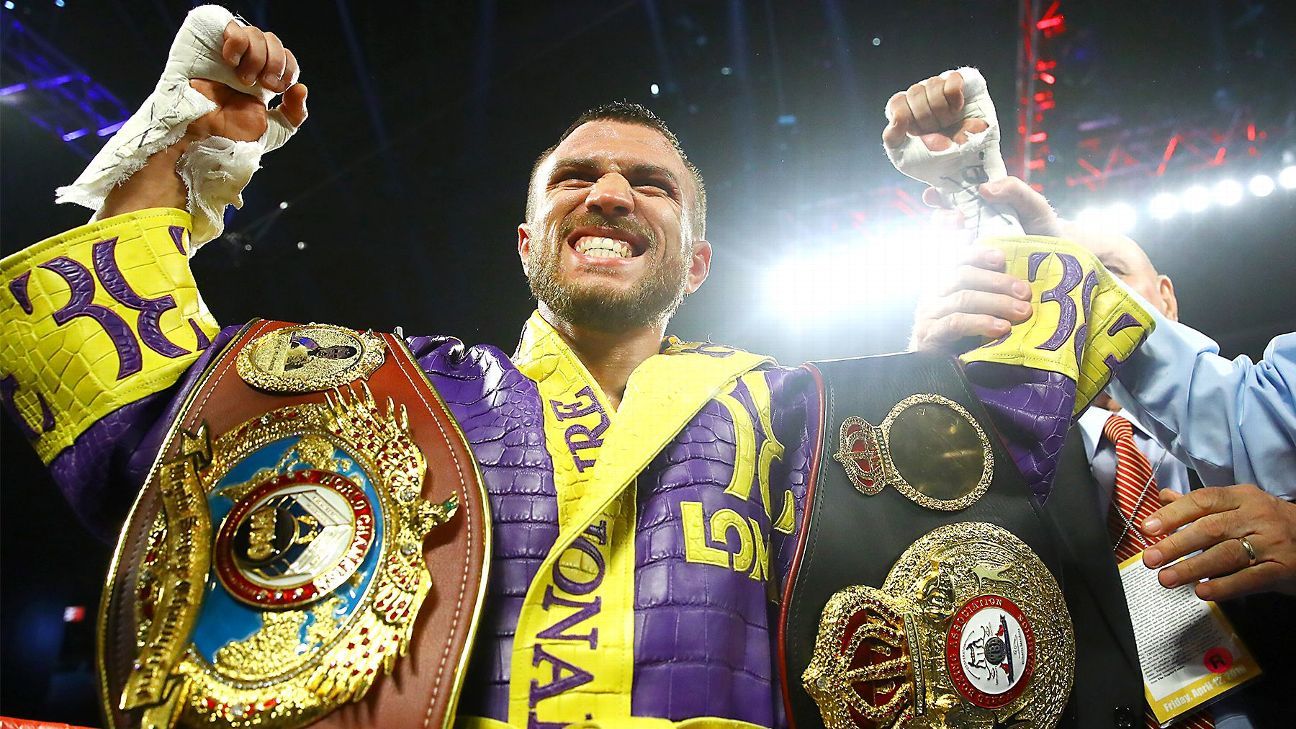 Former pound-for-pound king Vasiliy Lomachenko steps back into the ring Saturday night at Madison Square Garden to face Richard Commey (9 p.m. ET on ESPN/ESPN+). It will be Lomachenko’s second fight since a shocking loss to Teofimo Lopez that stripped Lomachenko of his three lightweight titles.

In his first fight after losing to Lopez, Lomachenko became the first man to stop Masayoshi Nakatani, making a statement against a former Lopez opponent who took Lopez the distance. This fight against Commey was supposed to bring Lomachenko back to Lopez, but George Kambosos Jr.’s upset two weeks ago sent the lightweight division spinning.

Two other lightweight standouts, Devin Haney and Gervonta Davis, secured victories of their own this past weekend, but neither was overly impressive. Now it’s Lomachenko’s turn, and the 33-year-old star has only one dream in mind: Become undisputed at 135 pounds.

Lomachenko sat down with Mark Kriegel on Thursday to discuss his future, his mindset and why some have even given him a new nickname — “Voldemort.”

Editor’s note: Responses have been edited for clarity and brevity.

Kriegel: Vasiliy, you’re No. 1 in the WBC and the WBO. This is the second ranked big guy you’re facing since a defeat. What do you want to happen here?

Lomachenko: It’s the next step to my goal now. I have a dream, be undisputed world champion. I failed to fulfill my dream.

Do you want this more now than you did before you lost?

Yes. Absolutely. In my head it’s the same situation when I was an amateur in 2007. Then I lost my first bout to Albert Selimov in the World Championship. It was in Chicago. I lose that fight, but then I come back. I live with this moment, because I had never lost before and it was a big, big shock for me. I always remember that moment, and that moment pushed me to continue. It’s the same situation now. And now I have one more chance.

Tell me about Richard Commey. What makes him dangerous?

He’s a tough guy. He has power. He has experience. He has a reach. He is taller than me, and he understands boxing.

What are his weaknesses?

I know his weaknesses, but I can’t tell you now.

What’s the difference between him and another very tall lightweight you just fought in Nakatani?

He understands boxing more. He’s more technical if you compare him with Nakatani. He has more power than Nakatani.

No, I don’t think about this. I never thinking about knockout or how I need to finish my fight. I just want to show my best style, my best skill. And all strategy, what my father give me on that fight. I want show it for him, for my father.

What was it like coming back from that loss to Teofimo?

What is the most important goal in your life?

What did you tell your son when you lost?

It’s sports. It happens. And it’s a lesson of life. Maybe, I don’t know, maybe I was not ready for this. But, you know, then I lose. It changed a lot of thinking in my head.

For example, a request from a relative, something that I would not pay much attention to, but something which might be important — for that person — I used to not give enough attention to that, and now I change my attitude.

I lost my time for myself. It’s not right. I have kids, and I need to give him more time in our life.

This was supposed to be the year that the young guys took over the lightweight division, took over boxing. What happened?

Top Rank Boxing is on ESPN and ESPN+. Subscribe to ESPN+ to get exclusive boxing events, weigh-ins and more.

It’s boxing. Nobody knows what happened. We have a very good boxers in the division. I think it’s the most interesting weight class in the world.

Who is the best lightweight?

We don’t know, because we didn’t fight each other.

Everybody talks on social media. But no one calls you out. Why?

I don’t know. I read some comment on my post yesterday and one guy writes, “Nobody call Loma because Loma now, like Voldemort from movie Harry Potter.” Everybody is scared of this man, scared to say his name.

Do you think that they’re scared to say your name?

Who would you like to fight? Are you chasing specific opponents or belts?

Give me your thoughts on what you saw with Teofimo and Kambosos.

Kambosos does a very good job, a very smart job. And now he’s the best in our division because he has the belts.

What about Devin Haney and ‘JoJo’ Diaz? What did you see?

But what did you see with Tank Davis and Isaac Cruz?

I liked that fight. A lot of people expect Davis to be able to fight top boxers, and maybe a lot of people think that he’s ready to do so. But as a result of this fight, we saw a lot of issues. I don’t know what round he has a problem with his hand, but it’s not only your boxing skill. How about your defense? You take a lot of punches. Even if you have a problem with your hand, you can defend.

Now I understand why his promoter Floyd Mayweather don’t wanna organize a fight with the other top fighters.

So in your mind, is Tank Davis a great fighter?

No, of course not. He is not great. How can he be great if he not fight the top fighters from our weight class? How?Or p

You know what? He surprised me. He surprised me when I saw his fight with Luke Campbell. He goes down and after he can come back. I was surprised. My respect goes to him. He’s a top level.

Garcia, Davis, Haney, Kambosos — do you think any of those guys are going to fight you?

So what do you do now?

I have a fight on Saturday. After Saturday we discuss who’s next.

What would it take for you to fight Shakur Stevenson?

What if he had two belts?

No. Now I have a goal, 135 lightweight world championship. That’s it. I stay at 135 and my goal will be a champion in these weight classes. This is my goal. This is my plan.

What about just two?