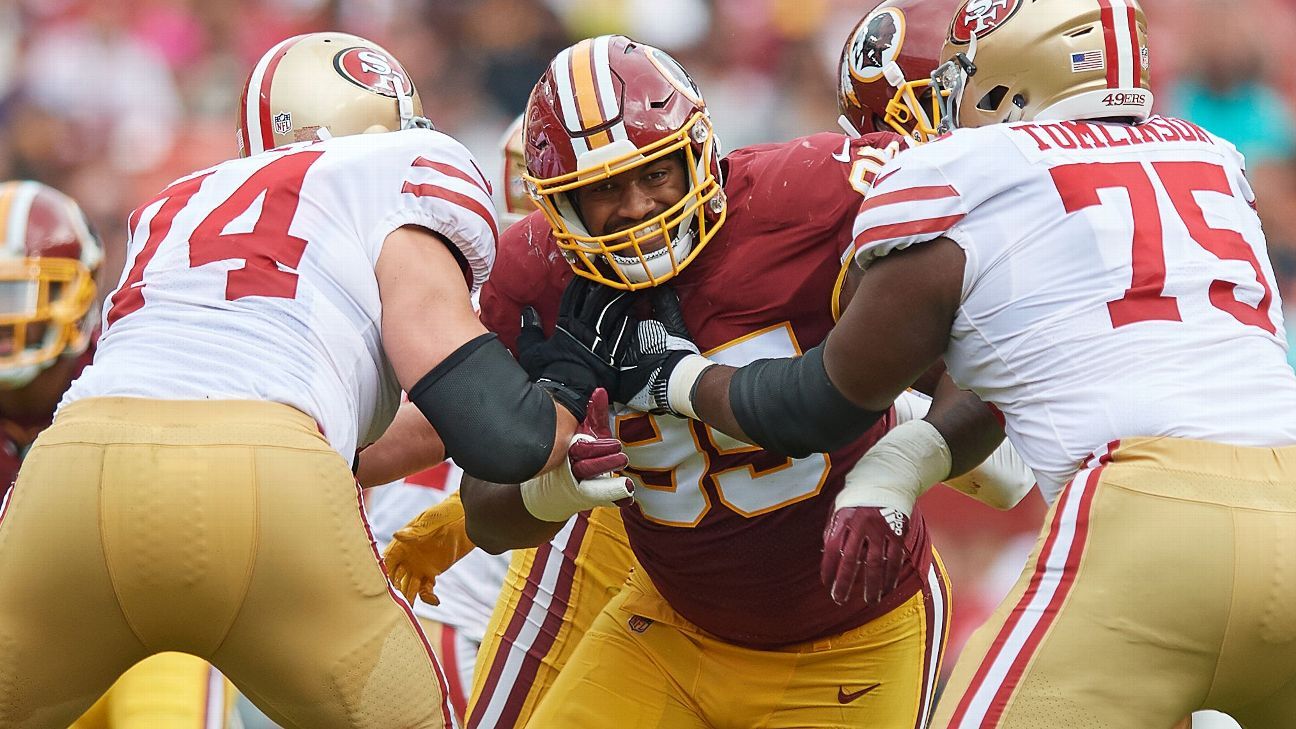 ASHBURN, Va. — The Washington Football Team received its first bit of good news regarding the reserve/COVID-19 list as it returned four defensive linemen, including Jonathan Allen and Montez Sweat, to the active roster, the team announced Saturday morning.

Sweat remains on injured reserve, though Washington designated him to return to practice. He’s expected to be activated off the list in time for Tuesday’s game at Philadelphia (6-7). Sweat hasn’t played since fracturing his jaw in an Oct. 31 loss at Denver.

Washington (6-7) also activated defensive ends James Smith-Williams and Casey Toohill off the COVID-19 list. Those two had been starting at end in place of Sweat and injured Chase Young, who tore his ACL in a Nov. 14 win over Tampa Bay. Neither Toohill nor Smith-Williams played in Sunday’s loss to the Dallas Cowboys.

The NFL moved Washington’s game vs. Philadelphia from Sunday to Tuesday because of its COVID outbreak. It’s a pivotal game for playoff positioning. Washington currently owns the seventh and final playoff spot.

Washington still has 19 players on the COVID-19 list, including its top two quarterbacks in Taylor Heinicke and Kyle Allen. There is optimism that Allen will return in time for Tuesday’s game. If neither one returns, then Washington will choose between Kyle Shurmur, on its practice squad since Sept. 13, or Garrett Gilbert, who practiced with the team for the first time Friday.

Though two of their other top seven linemen remain on the list — tackles Matt Ioannidis and Tim Settle — the return of the others will provide a boost. Allen has been having his best season and leads the team with 7.5 sacks, a half sack off his career best.

Washington’s defense has played well, led by the line. In the past six games Washington ranks third in total yards allowed per game and eighth in points. The line has been a major reason and it will be crucial vs. Philadelphia.

The Eagles average an NFL-high 210.5 rushing yards per game. But, with a healthier front, Washington can counter using a five-man line, as it has done vs. other teams that like to run the ball.

Though Sweat hasn’t played in more than a month — and had not practiced before today — the coaches have said they think he’ll be able to play. They have pointed to how he has stayed in shape. But it’s uncertain how many snaps he’d receive.