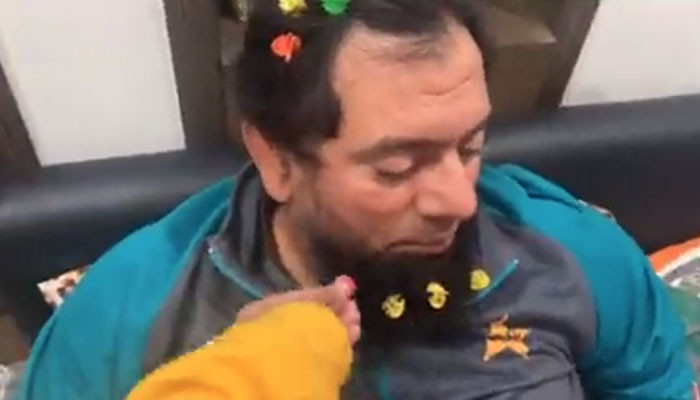 To express their love for their father, the daughters of Pakistan’s interim head coach Saqlain Mushtaq welcomed him home after three months in a unique manner.

Taking to Twitter, Saqlain Mushtaq shared an adorable video of himself in which his daughters are glamming him up with small hair clips.

In the video, his daughters can be seen putting small colorful clips on his hair and beard, while the head coach is seen enjoying his daughters’ love and the unique welcome.

In his tweet, Mushtaq said, “Clearly…I’m home after a long 3 month’s of cricket serving the great Pakistan.”

The adorable video of Saqlain Mushtaq and his daughters is doing the rounds on social media since it was uploaded by him.

Last year, on April 7, Saqlain Mushtaq, the inventor of Doosra, let his daughter not only gave him a get-up of a red-headed woman, but he also filmed it and shared the video on Twitter to two important messages during the COVID-19 pandemic.

There is no harm in having a good time with your loved ones was message number one, whereas “stay home” amid Covid-19 pandemic was the other one.

“We all are in quarantine. Stay at home, stay safe, look beautiful and enjoy with your loved ones,” he said.

Mushtaq, sporting a red wig, aqua-coloured eye makeup and pink lipstick, looked happy by the side of his daughter as he narrated what was done to him in the mix of his Pakistani-British accent.

“Couple of years back, she did my makeup and I put a video up on Twitter which you guys liked. Today she forcefully told me she wants to play with me and brought a new get up, my be wig as you can see,” Saqlain had joked in the video after he asked his daughter if she was happy.