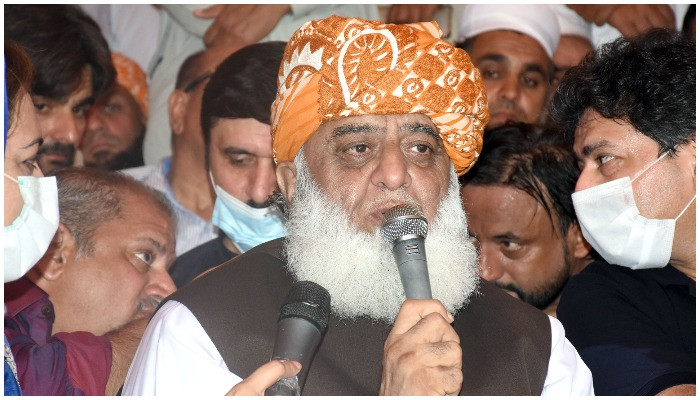 After coming under fire for issuing a statement over the lynching of a Sri Lankan national in Sialkot, JUI-F chief Maulana Fazulr Rehman on Monday clarified that he “unconditionally condemns” the incident.

Speaking to the media before a meeting of the Pakistan Democratic Movement (PDM) leaders, Fazl said that while he condemned the tragedy, the question remains as to who would stop such incidents from occurring again.

“The state and the Constitution will have to become active [in dealing with such cases],” Fazl said, adding that even if his own party was in power, he would have still maintained that the government was at fault.

Fazl went on to say that “whenever an incident is related to religion, it is exceptionally highlighted [in the media].”

“In a bid to stop such incidents from occurring again, we will have to bring a unified national discourse to the fore,” he said.

The PDM chief also said that he has never believed in forcing an ideology at gunpoint.

What did Fazl say earlier?

On December 4, Fazl — referring to the lynching — had said that while the incident was reprehensible and shameful, such incidents would continue if the state doesn’t take action against blasphemers.

“The incident in Sialkot is reprehensible and shameful. There should be a comprehensive investigation. However, if the state does not take action against those accused of blasphemy, then such incidents will continue to happen,” Fazl had said in a Twitter statement.

He went on to say that in the past, there had been a similar backlash against “government-sponsored fugitives accused of blasphemy.”

“Under the guise of such incidents, the international establishment conspires against the religious class and tries to make the Islamic provisions of the Constitution controversial,” he said.

“A comprehensive investigation should be carried out to find out who the people behind this are and what nefarious purposes they hold.”

Senior PML-N leader Ahsan Iqbal and PPP Senator Mustafa Nawaz Khokhar on Sunday took to Twitter and called Fazl out on his statement.

“With due respect, Maulana Sahib, such incidents should be unconditionally condemned as Islam does not allow such fanaticism and illegal killings by mobs in any case,” said Ahsan Iqbal. “The nation expects religious scholars to guide them in such matters.”

Akin to that, Khokhar wrote that when it comes to condemning such incidents, there should be no ifs and buts.

“Maulana Fazlur Rehman Sahib is a respectable figure but, on this occasion, he should have condemned the Sialkot tragedy by taking a stand in blunt and clear words instead of using ifs and buts,” he wrote.

Diyawadana Priyantha, working as a manager at a private factory in Sialkot, was lynched on Friday by a mob after being accused of blasphemy.