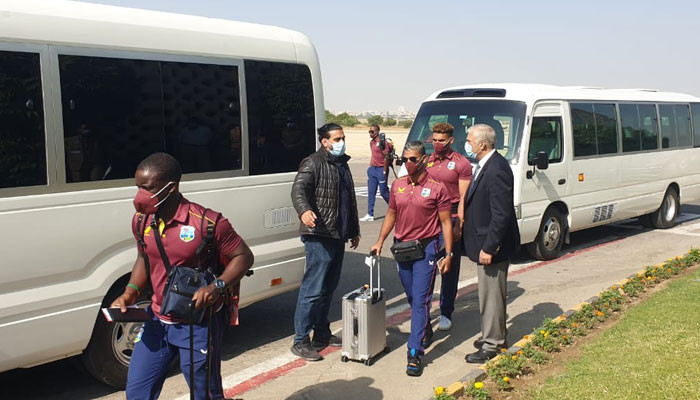 KARACHI: The West Indian cricket team Thursday arrived in Pakistan to play the T20 and ODI series against the home side.

The West Indies cricket team landed at the Jinnah International Airport in Karachi today. Sources privy to the matter said that COVID-19 tests were conducted of the players and the team’s administrative officials at the airport.

Sources in the Pakistan Cricket Board (PCB) said the cricketers will quarantine in the hotel till their PCR results came back negative.

The first T20 fixture between the two teams will be played on December 13.

It is pertinent to mention that members of the Pakistan squad, who were in the country, have entered the bubble in Karachi while the players, who were part of the squad playing Bangladesh series, will join them today.

On December 2, Pakistan had announced the T20I and ODI squads for the upcoming home series against West Indies.

In a statement, the PCB had said from the 18 players who were part of the recently-concluded T20I series against Bangladesh, Hasan Ali, Imad Wasim, Sarfaraz Ahmed, and Shoaib Malik have been left out, while fast bowler Mohammad Hasnain has been added to the 15-man squad.

Likewise, from the 17 players who were available for selection for the England ODIs in July, Asif Ali, Haider Ali, Iftikhar Ahmed, Khushdil Shah and Mohammad Wasim Jnr have replaced Faheem Ashraf, Hasan Ali, Salman Ali Agha and Sarfaraz Ahmed in the 17-member side, while Abdullah Shafique has been named as a travelling reserve, it had added.