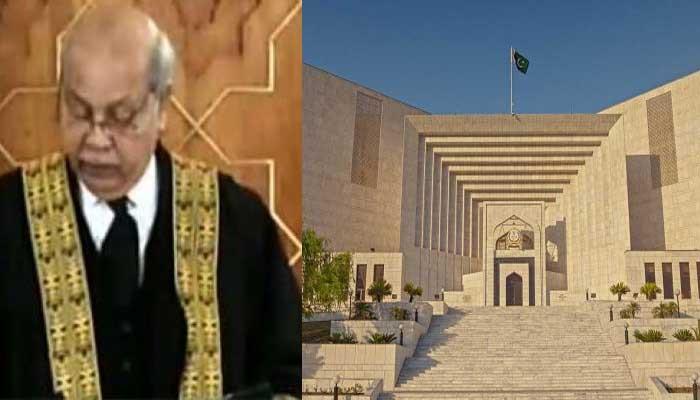 ISLAMABAD: The Supreme Court (SC) Monday took strong exception to non-production of a prisoner before it and ruled that the prime minister would be summoned if the detainee was not produced on Tuesday (today).

A three-member SC bench, headed by Chief Justice of Pakistan (CJP) Justice Gulzar Ahmed, heard a case against the detention of one Arif Gul, who was arrested for attacking a military camp near the Afghan border area.

The additional attorney general informed the court the accused was in detention centre and it was very difficult to bring him to the court. The CJP remarked whether the court building would explode if the accused was brought there.

“Let’s lock the court if the detainee was not to be produced,” the CJP remarked, directing the additional attorney general to produce Arif Gul in the court on Tuesday, adding that the court was empowered to summon the defence leadership as well.

The court was informed that the nationality of the detainee was controversial, to which the CJP asked as to why the issue was not resolved yet as the matter was under investigation since 2019. The judge remarked that what the court could do when the government offices were replete with corruption.

Khyber-Pakhtunkhwa Advocate General Shumail Ahmed Butt informed the court that the detainee had attacked a military camp near Afghan border area, adding that his counselling and vocational training had been completed in the detention centre.

Justice Jamal Khan Mandokhel, another member of the bench, questioned the legal status of the interment centre as well as the law under which Arif Gul had been detained. The judge observed that former tribal areas were now a settled area as both FATA [Federally Administered Tribal Areas] and PATA [Provincially Administered Tribal Areas] had been merged now into Khyber-Pakhtunkhwa. The KP advocate general told the court the detainee was not produced as the distance was quite long.