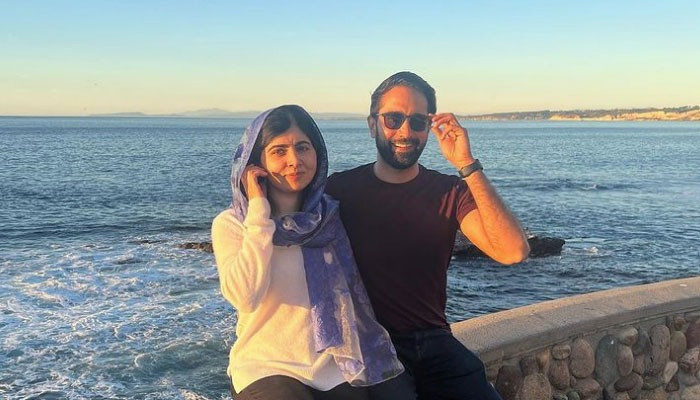 A video of Nobel prize winner Malala Yousafzai and her husband Asser Malik taking a New Year challenge to decide their resolutions for the next year has taken the internet by storm.

The two have become one of the most-watched couple on the internet since they tied the knot.

In the video, the couple can be seen sharing three resolutions each, but with a twist — the final decision on whether or not the resolution must be followed depended on the glass which was kept across the table.

The couple sat armed with a few pens each and shared their resolutions one by one after which they threw a pen towards the glass. If the pen fell inside the glass, it meant adopting the resolution, otherwise not.

Among the three resolutions that Malala shared, one was that she should start going to the gym. The Nobel laureate was relieved when the pen fell outside the glass.

For her second resolution she asked whether her husband Asser Malik should shave his beard. Malala then herself threw the pen sideways saying: “You can’t, this is not allowed.”

“If you shave your beard just leave the house,” she said in jest.

On the flip side, Asser’s first resolution was whether the couple should buy a Play Station or not. Much to Malala’s relief and Asser’s disappointment, the pen fell outside the glass once more.

Malala held her breath for Asser’s second resolution which asked whether she should follow “no-shopping January”. Fortunately, Malala’s shopping passion did not take a hit with the pen again falling outside the glass.

The couple then asked whether they should “unfollow” American comedian Hasan Minaj on Instagram. They threw their pens in one by one but none of them dropped inside the glass.

The last major resolution where Malala stood up, reached over and dropped the pen herself in the glass was about donating to the Malala Fund, an international non-profit organisation that advocates for girls’ education.

“Should people watching this video, including Hasan Minaj, support girls’ education by donating funds to Malala Fund?” she asked, and then dropped the pen in herself.

To conclude, the duo high-fived each other and ended the video.