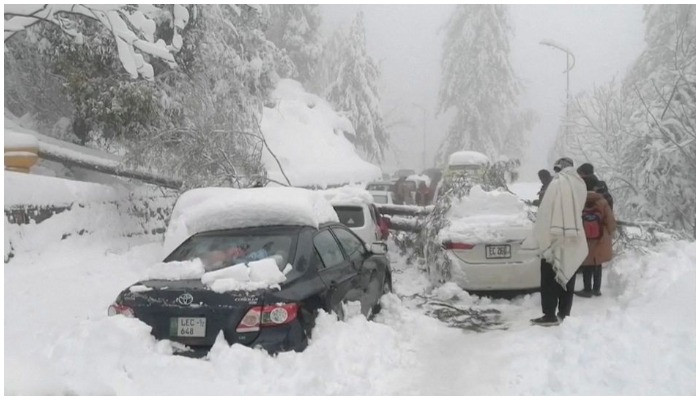 Inspector General (IG) National Highways and Motorways Police Inam Ghani on Saturday issued an advisory on what people should do if they are stranded in their cars in heavy snowfall.

Ghani warned people that carbon monoxide is odourless, very hard to detect, and can quickly cause death.

His words of caution come after at least 21 people died from likely carbon monoxide poisoning in Murree after “unprecedented snowfall”.

He said that most of the people who died did not die due to the cold, but because they left their heaters on in the car and went to sleep.

“The fumes from the heater killed them,” he said, referring to the fumes which found no exit due to silencers buried underneath snow and were breathed in by people.

Ghani advised citizens to “open a window slightly and clear the snow away from the exhaust silencer pipe”.

Similar instructions in Urdu were tweeted by the National Highways & Motorway Police (NHMP).

Ghani also asked the citizens to not travel to Murree amid heavy snowfall.

“Please don’t travel to Murree! Snowfall has started again,” he wrote in the afternoon.

He said that NHMP officers and the National Highway Authority are working on clearing the Murree Expressway, while warning of “congestion in Murree and on expressway”.

“People in the hotels for the night have come out on the roads. New vehicles are not being allowed to go to Murree,” he added.

The provincial government has declared Murree a calamity-hit area after more than 20 tourists died in their vehicles today amid heavy snowfall.

Interior Minister Sheikh Rasheed confirmed the death toll, saying the government has sought help from Pakistan Army and other civil-armed forces to rescue the stranded tourists.