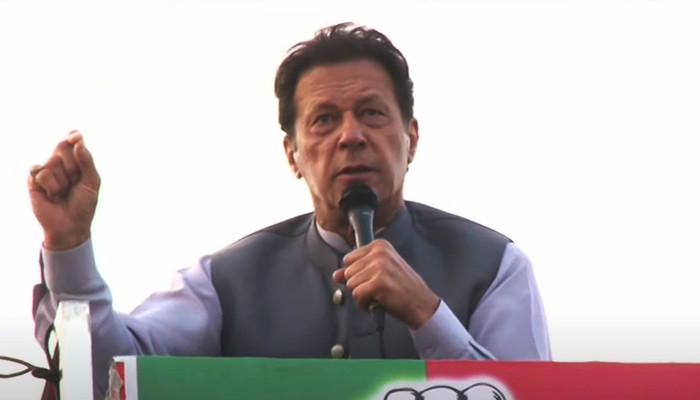 MARDAN: PTI Chairman Imran Khan said Thursday that whoever gives an NRO to “thieves” — the incumbent rulers — is a “traitor” as he lashed out at institutions for allegedly torturing his party’s leaders.

“All thieves are being released; Shehbaz Sharif and his son have been acquitted. Whoever they are, they should be ashamed. You are a traitor who is betraying their country,” Khan said while addressing a public rally in Mardan.

Khan — since his ouster in April — has been alleging that the coalition government rulers came into power for looting the country’s money and getting their cases disposed of.

In his jalsa address today, Khan called out the people who were having cases registered against him and said that he would “not back down”.

The PTI chairman also chided the institutions, blaming them for torturing his chief of staff Shahbaz Gill and party leader Azam Swati.

“If you think that you will be respected by torturing people, then you are mistaken,” Khan said while berating the institutions. He asked them to be “embarrassed” by their actions.

Gill was recently released on bail in a sedition case after he was behind bars for nearly a month, while Swati was arrested earlier in the day and sent on physical remand for his alleged “controversial tweets”.

‘Haven’t misused my power even once’

In an apparent reference to the institutions, the PTI chairman said that God hasn’t given the luxury to remain “neutral” when it comes to deciding between the right and wrong paths.

“Ask your children about Nawaz Sharif and Asif Zardari. These two families have looted the country for the last 30 years,” the PTI chairman said.

Khan alleged PPP and PML-N’s top brass is in politics to launder money out of the country and that movies have been filmed on their corrupt practices.

Slamming PML-N supremo Nawaz, Khan asked that since he has been seeking bail every now and then as several cases are being lodged against him, should he also leave the country.

“Had Imran Khan been a corrupt person like Nawaz Sharif, he would have left the country the first chance he got,” Khan said, adding that the PML-N leaders have four “huge palaces in London”.

Khan alleged that Nawaz and company are in politics to misuse their powers and that after coming into power, the PML-N supremo set up 17 factories.

“On the contrary, look at my record. I haven’t misused my power even once during my tenure of 3.5 years,” he said.