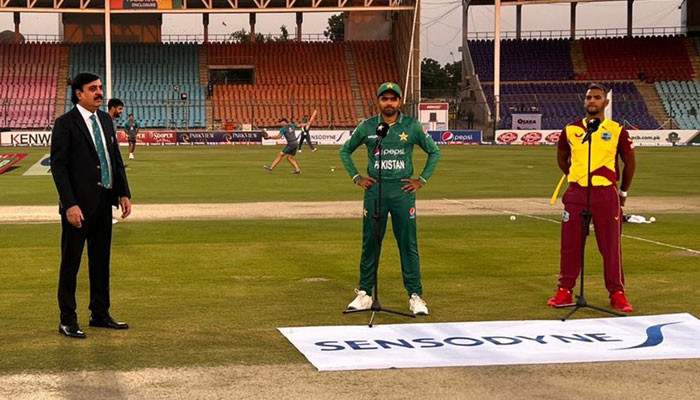 KARACHI:  Windies sent Pakistan skipper Babar Azam back to the pavilion in the third over of the second  T20 International on Tuesday at the National Stadium in Karachi.

Babar scored seven runs at a loss of seven balls with the help of one boundary.

Pakistan opted to bat first after winning the toss for the second of three T20 Internationals against a COVID-hit West Indies team.

The last of the T20 matches will be held on Thursday, December 16, in Karachi.

On Monday, a dominating Pakistani side thrashed West Indies by 63 runs in the first fixture of the three-match T20 series.

Windies’ captain Nicholas Pooran won the toss and put the Green Shirts to bat first. Despite losing two important wickets early on, followed by intermittent dismissals of batsmen, Pakistan were able to put up an impressive 200-6 total on the board.

In the second innings, Pakistani bowlers were able to pick up quick wickets, with Shadab Khan taking three, Haris Rauf one, Mohammad Wasim four, Mohammad Nawaz one, and Shaheen Shah Afridi one.

Shai Hope (31) scored the most for the Windies, followed by Rovman Powell, who was able to contribute 23 runs to the West Indies’ total of 137-10.