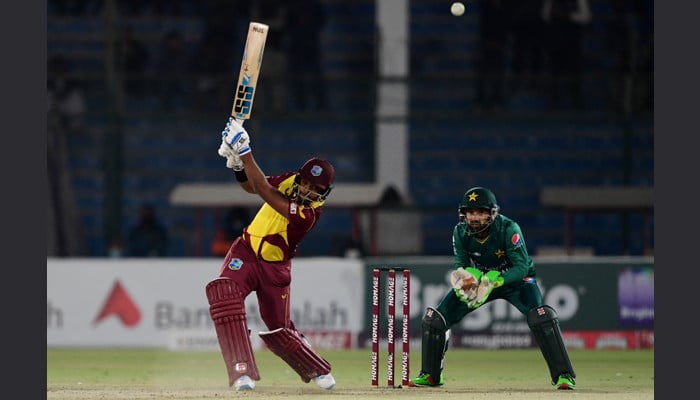 KARACHI: West Indies set a 208-run target for Pakistan in the COVID-disrupted third and final Twenty20 international in Karachi on Thursday.

Openers Brandon King and Shamarh Brooks set the stage for the defendible total with their knocks of 43 and 49 each.

West Indies skipper Pooran was the highest scorer in the innings, adding 64 runs to the scoreboard, aided by Darren Bravo’s efforts who contributed 34.

The side managed to come away largely undented, with a loss of only 3 wickets — those of Kings, Brooks and Pooran.

From the hosts’ side Shahnawaz Dahani captured one wicket (Brooks) — his first international one on home soil — while Mohammad Wasim took the other two.

Earlier, Pooran won the toss and opted to bat against Pakistan.

The match was nearly called off after five more members of the touring squad — including three players — tested positive for COVID-19.

Six players were ruled out overall, but the West Indies agreed to play after the remaining 14 players tested negative.

Gudakesh Motie made his international debut at 26, with Darren Bravo also coming into the side.

Shai Hope and Akeal Hosein were both left out after testing positive for the virus.

The three-match ODI series — previously scheduled to begin in Karachi from Saturday — has been pushed ahead to early June 2022.