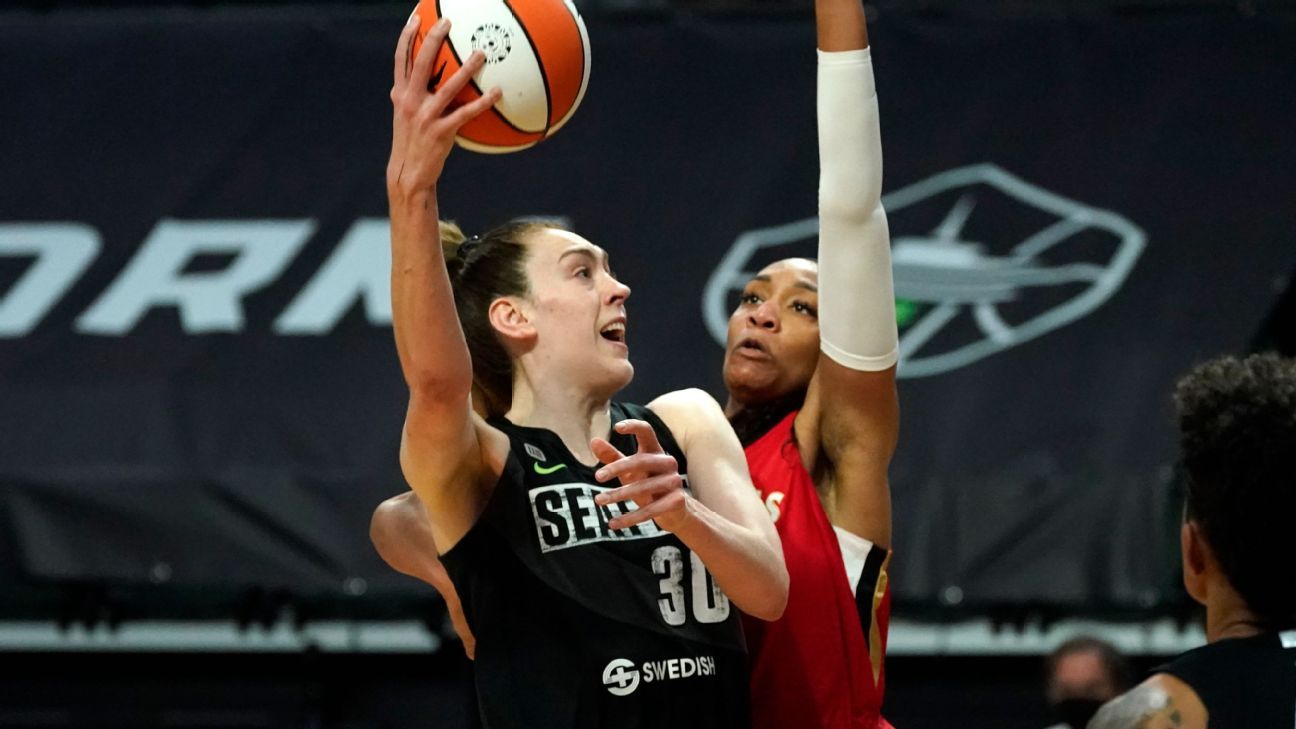 After changing teams as an unrestricted free agent last year, Candace Parker led her hometown Chicago Sky to their first WNBA championship. What kind of difference-making free agents are available this season?

Whether we see the same kind of fireworks as the past two winters, when stars like Parker and Skylar Diggins-Smith — who helped the Phoenix Mercury to the 2021 WNBA Finals, where they lost to Chicago — changed teams, remains to be seen. However, this class of free agents is undeniably more star-studded than the first two since a new collective bargaining agreement increased salaries and made free agency a bigger part of the WNBA equation.

Consider that when I projected free agents a year ago, Liz Cambage of the Las Vegas Aces ranked as the top player available. (Parker was third on the list.) Cambage has now dropped to fifth on the 2022 version after signing a one-year contract as the Aces’ core player.

Three of the past four league MVPs (Jonquel Jones, A’ja Wilson and Breanna Stewart) are free agents this year. Predictably, they top my projections in terms of wins above replacement player (WARP) we’d expect in 2022 by my player value metric based on their performance over the past three seasons and ages. Who else rounds out the list? Let’s take a look.

The league’s reigning MVP tops the rankings of free agents. Jones was previously a free agent in 2020, when she wasn’t yet eligible for a supermax contract because she had just four years of experience. Now, coming off a season in which she led the WNBA in most every player value metric and led the Sun to a league-leading 26-6 record before Connecticut was upset in the semifinals, Jones is sure to command the supermax — most likely as the Sun’s core player.

Given everything she has already accomplished in the WNBA — an MVP, two Finals MVPs in the Storm’s title wins and, most recently, MVP as the Storm won the inaugural Commissioner’s Cup — it’s scary to think that Stewart is just 27, the age at which players typically peak. Like Jones, she re-signed a two-year deal in 2020 as a restricted free agent, setting her up for a bigger supermax payday this time around.

This is the first trip through free agency for Wilson. Coming off her rookie contract, she’ll be restricted, giving the Aces the ability to match any offer made to her. Realistically, it shouldn’t come to that. As long as Wilson wants to stay in Las Vegas — which just hired Becky Hammon as its new head coach — she and the team should be able to come to terms on a max contract (as Wilson isn’t yet eligible for the supermax).

The Sky’s title breakthrough was a huge moment for Vandersloot, who had spent 11 seasons in Chicago without a title to match her star-studded individual résumé. After four consecutive All-WNBA honors (two first team, two second team), Vandersloot is set up to sign what might be her last big contract.

Because Cambage had never previously been designated a core player before last season, the Aces could apply the designation again, guaranteeing her a one-year deal for the supermax ($228,094) but taking her off the market. Cambage changing teams as a core player would require a sign-and-trade deal like we saw last year when the Seattle Storm traded Natasha Howard to the New York Liberty.

Assuming Fowles decides to return for a 15th WNBA season, she has a chance to command a large raise after playing out a contract signed under the old collective bargaining agreement that paid her $117,894 last season. Fowles easily outperformed that, bouncing back from an injury-plagued bubble campaign to earn All-WNBA Second-Team honors.

Meesseman last played in the WNBA in 2020, when she averaged 13.0 PPG, 5.3 RPG and a career-high 4.5 APG for a Mystics team without Elena Delle Donne in the Wubble. The 2019 WNBA Finals MVP opted against playing in 2021 after leading Belgium to the quarterfinals of the Tokyo Olympics.

Having earned All-WNBA First-Team honors in 2021, Loyd is also set for a raise after finishing a contract that paid her $121,500 last season. Seattle faces an interesting decision as the team can’t core both Loyd and Stewart, meaning at least one will be an unrestricted free agent with the ability to look elsewhere.

With the Mystics short-handed in the Wubble, Hines-Allen increased her scoring average from 2.3 PPG to 17.0, along with 8.9 RPG. Hines-Allen settled into a smaller role with more help last season, averaging 12.9 PPG and 7.0 RPG, but still set herself up for a nice payday as a restricted free agent coming off her rookie deal as a second-round pick by Washington.

It has been more than two years since Vadeeva last played in the WNBA, and her rookie contract is up, meaning she’s allowed to negotiate only with the Sparks. Realistically, Los Angeles is bidding against Vadeeva taking her summers off. Getting her back would be a win for the Sparks. Although Vadeeva played limited minutes, her age, massive per-minute production (23.4 points and 11.6 rebounds per 36 minutes in 2019) and strong play for UMMC Ekaterinburg alongside Jones and Meesseman (as well as Stewart in 2020-21) suggest she’d be a standout if she returned.

Bradford cracked a WNBA roster six years after playing for the Sparks as a rookie and averaged 17.3 points and 7.4 rebounds per 36 minutes, earning a starting job by season’s end and suggesting productive play in front of her. That apparently won’t come in Atlanta. Though Bradford would be able to negotiate only with the Dream if given a qualifying offer, the organization said in November that she and teammate Courtney Williams will not return after Williams posted a video showing them in an altercation outside an Atlanta club in May. Bradford will serve a one-game suspension to start the season due to the video.

A year ago, Williams slipped through the cracks in free agency, signing a one-year deal worth $91,250 to join the Aces. She started all 32 games, repeating her 42% 3-point shooting from the previous season and solidifying her reputation as one of the WNBA’s best perimeter defenders. That should command more attention this time around.

After a strong WNBA debut with the Fever in 2020, Allemand also sat out last season to play with Meesseman for Belgium in the Olympics. Her return would upgrade Indiana’s rotation at point guard, though she said in a four-part Instagram post late last month that she will be taking some time off to focus on her mental health.

Certainly, Charles’ projection is the most surprising here. She ranked fourth among free agents with 5.4 WARP last season. Her projection is held back by a less effective final year with the New York Liberty in 2019 (Charles shot just 39% from the field and 19% from 3-point range, as compared to 45% and 36.5% respectively in Washington in 2021) and expected aging at 32. Assuming Charles is used like she was with the Mystics, she should remain a valuable contributor to a contender after earning All-WNBA Second-Team honors.

Now in her mid-30s, Quigley spent much of last season back in a reserve role for the first time since 2016 and posted her lowest scoring average (13.4 PPG) since then. However, the three-time WNBA 3-point contest champion remains a dangerous perimeter threat and started all 10 games the Sky played en route to the title, averaging 15.2 PPG in the playoffs.

The last time McCoughtry hit free agency coming off a season lost to a knee injury, she responded with the most efficient play of her career, helping lead the Aces to the top seed in the playoffs and the 2020 WNBA Finals. Coming back from an ACL tear could be even more difficult now that McCoughtry is age 35, but don’t count out her ability to help a contender in pursuit of a championship after four losses in the WNBA Finals.

At age 40, Bird was still one of the WNBA’s best guards last season, averaging 27.7 MPG — her most since 2017. Aging and durability are the only question marks in Bird’s projection, assuming she puts off retirement. Bird missed the entire 2019 campaign after knee surgery and played just 11 of 22 games during the 2020 regular season due to unrelated injuries, but has been productive whenever she’s on the court.

Allen started a career-high 13 games in 2021 and also averaged a career-high 9.2 PPG. Her 38% 3-point shooting on more than five attempts per game helped space the floor, and Allen’s size is an advantage defending opposing wings.

Bouncing back from a disappointing first season with the Dream, Williams was a first-time All-Star in 2021, averaging a career-high 16.5 PPG and boosting her 3-point frequency while shooting 38% beyond the arc. Williams has been a volume scorer over the course of her career and the extra 3s couldn’t entirely offset making just 42% of her 2-point attempts (and a shocking 64% at the foul line). Add in a two-game suspension to start 2022 stemming from the altercation in Atlanta, and her market will be interesting to watch.

Williams heads into unrestricted free agency after averaging just 5.8 PPG, her lowest mark by a wide margin since winning Most Improved Player in 2016, her first season with the Dream. Advanced stats suggest Williams was no worse in 2021 and perhaps even better, so the strong rim protector (an All-Defensive First-Team pick in 2020) remains a top-20 free agent.