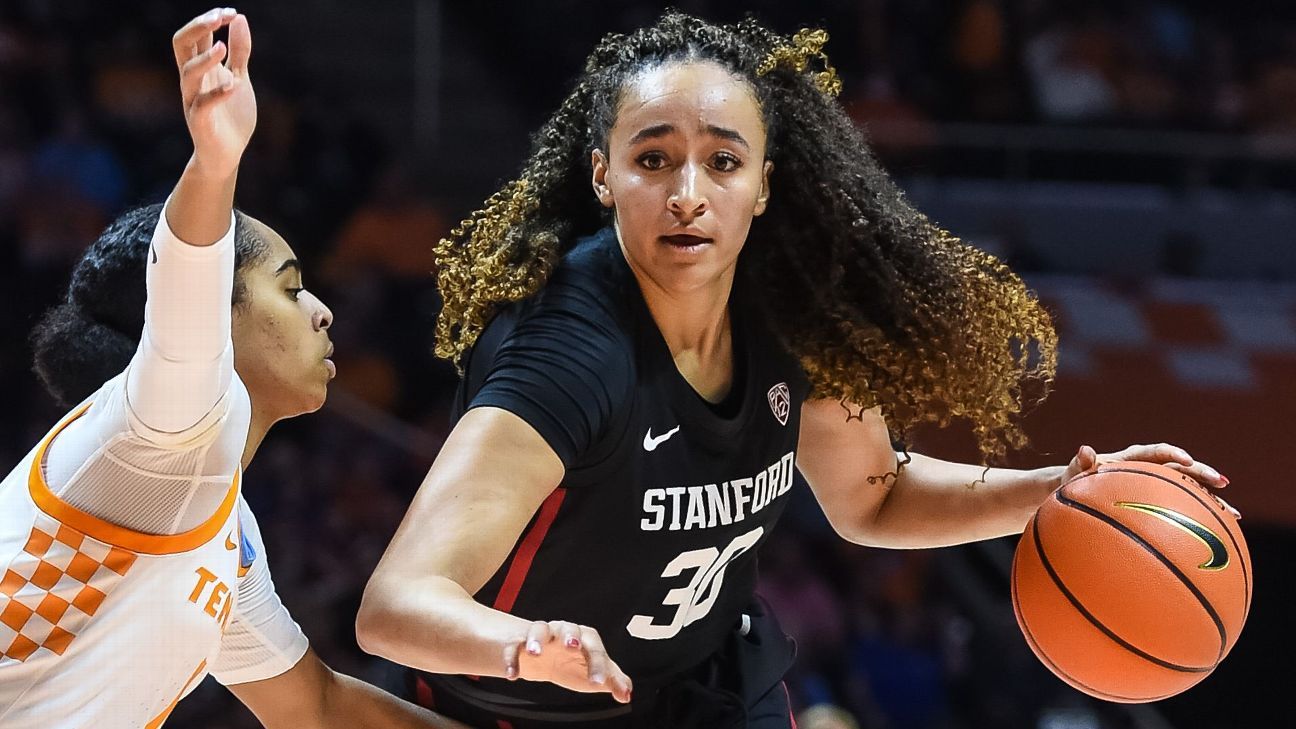 Just more than eight months have passed since Stanford squeaked past South Carolina 66-65 in the national semifinals in San Antonio, on the way to the Cardinal’s long-awaited third national championship.

Sometimes, a matchup played even that recently doesn’t have much impact on a game in a new season. But with almost all of the key players back from that April 2 meeting in the Alamodome — save Stanford point guard Kiana Williams — the past is perhaps a little more relevant as No. 1 South Carolina hosts No. 3 Stanford on Tuesday (7 p.m. ET, ESPN2/ESPN App) in what is expected to be one of the marquee nonconference games of the 2021-22 women’s college basketball season.

Gamecocks fans are long since tired of seeing the replay of Aliyah Boston‘s pained reaction to a missed a putback at the buzzer of that 2021 NCAA tournament game. Of course, without Boston’s steal and subsequent offensive board — her 16th rebound that night — she never gets a chance at that putback. In short, she did everything possible to give South Carolina an opportunity to win.

And maybe that’s just a little bit of extra fuel this season as the 11-0 Gamecocks look to stay undefeated in their 2022 championship quest.

If you’ve been following women’s basketball for a while, you might say Boston’s miss and Arizona senior Aari McDonald’s missed 3-pointer at the end of the championship game were just examples of fate finally favoring Stanford again at the Final Four after 29 years of near-misses between titles.

This season, the Cardinal already have lost as many games — two — as they did all of last season. Final Four Most Outstanding Player Haley Jones has played more in the point guard role thus far, although the Cardinal do that somewhat by committee as well with Williams gone.

In losses to Texas and South Florida, the Cardinal scored 56 and 54 points, but for the season, they are averaging 73.2 PPG, not too far off last season’s 77.7. Stanford is coming off a 74-63 victory at No. 7 Tennessee on Saturday, handing the Lady Vols their first loss this season despite shooting just 34.9% from the field.

Stanford outrebounded Tennessee 52-43, led by Jones’ 19 boards. But in South Carolina, the Cardinal will face what Gamecocks coach Dawn Staley has said might be her best defensive and rebounding team.

South Carolina is coming off a 55-46 victory at Duke on Wednesday, led by Boston’s 19 points and 14 rebounds. The Gamecocks, who have five wins over teams ranked in the top 15 this season, have been without guard Destanni Henderson since she played just 16 minutes vs. North Carolina A&T on Nov. 29 because of a leg injury. It remains to be seen if she will return to face Stanford.

Tuesday’s matchup also could be the 61st meeting between the top two teams in the AP rankings. Stanford’s win Saturday, coupled with NC State’s loss to Georgia on Thursday, might elevate the Cardinal to No. 2 in the AP poll. South Carolina is 1-4 in its previous 1 vs. 2 meetings; Stanford is 1-8 all-time in those matchups.

Sarah Ashlee Barker hits the 3-pointer against NC State to force OT, then Que Morrison makes the nifty layup in overtime to help take down No. 2 NC State.

For the season, Staiti is averaging 13.9 points, 7.6 rebounds and 2.6 blocks. She played her freshman season at Maryland, then transferred back to her home state of Georgia. Staiti was on the SEC all-tournament team last season, and took advantage of the NCAA’s blanket eligibility waiver to return for a fifth season.

With all of Oregon‘s injuries, beating the Ducks right now is not as noteworthy as it would be otherwise. Still, Kansas State’s 68-56 victory over Oregon on Saturday moved the Wildcats to 10-2. Their only losses are to No. 1 South Carolina and then-No. 5 NC State.

Once Big 12 play starts, we’ll find out how “for real” K-State is, as the Wildcats open with Baylor, Oklahoma State, West Virginia and Iowa State. But star center Ayoka Lee looks like the real deal, averaging 23.8 PPG, 11.1 RPG and 4.0 BPG.

The Wolverines got the program’s first win over a top-five team in Sunday’s overtime victory. Michigan won despite star Naz Hillmon fouling out in regulation. She had 15 points and 10 rebounds, while teammate Leigha Brown had 25 points. Michigan’s only loss is to Louisville.

The tweet went out Saturday night from Texas coach Vic Schaefer: The No. 11 Longhorns’ game vs. No. 4 Arizona on Sunday was canceled because the Wildcats were in COVID-19 protocol. Could anyone get to Las Vegas to play Texas on ESPN?

Fisher answered the call, and her Toreros hung with the Longhorns before Texas pulled away in the fourth quarter for a 74-58 win. San Diego lost to Arizona State at home on Saturday afternoon, then made the trip to Vegas to play its fourth team from a Power 5 conference this season. Fisher, in her 17th season at San Diego, isn’t afraid to challenge herself or her team.

The Cardinal will be South Carolina’s sixth ranked opponent so far this season. Aliyah Boston continues her national player of the year candidacy as she is averaging 16.9 PPG and 10.1 RPG and shooting 60.2% from the field.

Coach Jeff Walz got his second victory over UConn on Sunday, which was a great way to finish nonconference play. Louisville will start ACC play against Boston College on Dec. 30.

Stanford’s depth came through in the 74-63 victory at Tennessee, and the Cardinal also might need it against South Carolina. Cameron Brink was limited to 8 minutes vs. the Lady Vols due to foul trouble, but fellow forwards Ashten Prechtel and Kiki Iriafen combined for 22 points and 11 rebounds off the bench.

Tamari Key also struggled with foul trouble in the game against Stanford and played just 16 minutes without making a shot from the field. The Lady Vols as a team shot just 30.3%. Tennessee, which is averaging 66.9 PPG this season, should build on what they learned vs. the Cardinal.

Both of the Wolfpack’s losses this season have been to SEC teams: against South Carolina in the season opener on Nov. 9 and Thursday in overtime vs. Georgia. NC State is not used to opponents getting more 3-pointers and rebounds, but Georgia did. The Wolfpack crushed Virginia 82-55 on Sunday to end on an up note going into the holiday break.

The Longhorns were able to salvage their trip to Las Vegas by getting San Diego to replace Arizona in Sunday’s game. But it was the most frustrating game yet for standout freshman point guard Rori Harmon, who played just 7 minutes and fouled out. It’s something from which she can grow.

A matchup with Texas on Sunday would have been the Wildcats’ last nonconference game and their second against a ranked opponent. But the Wildcats are now in COVID-19 protocol, so they didn’t play the Longhorns. Arizona is scheduled to return to action Dec. 31 at USC.

Baylor fell 74-68 in overtime to Michigan on Sunday. Two of the concerns for the Bears were being outrebounded 50-35 and their starting guards going a combined 2-of-13 from behind the arc. Both of Baylor’s losses have been to ranked Big Ten teams; they fell at Maryland in November.

Paige Bueckers has undergone knee surgery and is projected to return in February. While the Huskies lost 69-64 to Louisville on Sunday, they got a lift from freshman Caroline Ducharme’s best game so far: 24 points and eight rebounds playing all 40 minutes.

After losing its other marquee nonconference game in a Dec. 2 rout at Louisville, Michigan got a big boost with its victory over Baylor — and a little revenge for last season’s Sweet 16 loss to the Bears.

In the Hoosiers’ 67-57 victory over Western Michigan on Sunday, Mackenzie Holmes had a career-high 19 rebounds to go with 17 points. She is averaging 18.4 PPG and 7.8 RPG.

The Terps, who weren’t in action this past week, have suffered all their losses against top-10 teams. Their next big test should be Jan. 2 at Indiana.

The Cyclones, who trounced Prairie View 108-39 on Sunday, open the Big 12 season on Jan. 2 against West Virginia.

The Yellow Jackets followed up their big Dec. 9 win over UConn — their first victory against a top-five opponent since 2009 — with a victory Sunday in their ACC opener vs. Wake Forest in which Lorela Cubaj became the program’s all-time leading rebounder at 1,046.

Georgia just wouldn’t give up in its 82-80 overtime victory against NC State on Thursday. So far the Bulldogs’ only loss was by one point against Georgia Tech. Georgia will open its SEC slate vs LSU on Dec. 30.

The Blue Devils made it an interesting game last Wednesday against South Carolina before falling 55-46, which says something. They won via forfeit against Miami on Sunday. When ACC season begins Dec. 30, Duke has a tough early slate, starting with Virginia Tech.

In the waiting room

Notre Dame Fighting Irish (10-2): The Irish play their next three games on the road: at DePaul, Virginia and Duke.

LSU Tigers (9-1): The Tigers are at the West Palm Beach, Florida, Invitational this week against Clemson and Texas Tech.

Oklahoma Sooners (9-1): After upsetting ranked BYU on Dec. 10, the Sooners will face Utah on Tuesday.