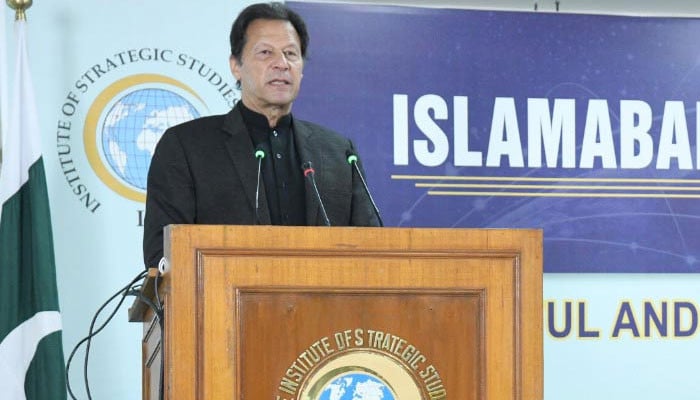 ISLAMABAD: Prime Minister Imran Khan Thursday said that instead of siding with so-called Cold War-like “blocs,” his country would like to help de-escalate tensions between the United States and China.

He was addressing the Islamabad Conclave 2021, which had the theme: “Peaceful and prosperous South Asia”. Khan cautioned in his keynote speech that the rivalry between the two world powers “is moving towards (another) Cold War and new blocs are (again) being formed.”

He said Islamabad does not want to “get trapped” into another Cold War the way it did by joining the US-led Western alliance against the erstwhile Soviet Union. “Pakistan must try its best to stop the formation of these blocs. We must not become part of any bloc,” he insisted.

“Pakistan wanted to unite people such as its efforts in cooling the stand-off between Saudi Arabia and Iran,” he said. Both countries appreciated that “we tried our best during a very critical phase where conflict could have occurred between them.

Khan recalled that Pakistan had served as the channel of communication to arrange a secret visit from Islamabad to Beijing in 1971 of then-US Secretary of State Henry Kissinger, which re-established Sino-US ties after more than two decades of diplomatic silence.

“We want to bring people together… Pakistan had played a role in opening up China to America back in the 1970s,” Khan said. The premier regretted that some people, who did not know reality of issues, misguide masses on the media.

Referring to the Institute of Strategic Studies, where the event was organised, he contended that if there were no such think-tanks in the country, then one tended to take ideas from outside, and try to adopt whatever new trends would surface, thus becoming slave of others. Therefore, the local think-tanks are badly required.

“You may educate our media as well and whenever you carry out research, place it before our local media too. “I watch programmes and people, who don’t simply know about things and keep on expressing their views and thus mislead people and this does not bring cohesion in the country and none understand what the national interests are,” he noted. The premier said the issue of Kashmir could not be resolved through guns and bombs, praying that such a government is formed in India with which Pakistan could hold dialogue with logic and sanity and resolve all issues.

He emphasised that Kashmir issue was the only issue between Pakistan and India, which would be resolved only through dialogue. “Only political dialogue is the way to resolving the Kashmir issue, while India has been trying to using strong-arm tactics against Kashmiris and resorting to atrocities on them to suppress them but will never succeed in doing so,” he noted. “History tells us that when you exclude people, then you marginalise people and then you radicalise them as well,” he said.

He emphasised that “you can’t win against a population; otherwise, today, US would have won in Afghanistan, having the strongest force”. He expressed hope that such a government was formed in India with which Pakistan could hold talks and resolve issues jointly, including the alarming challenge of climate change, after resolution of Kashmir problem.

PM Imran contended that Kashmir was the only one issue, which kept hostage the entire South Asia and regretted that while he tried hard for dialogue with India and he even talked to Narendra Modi “but all the overtures we made for peace, I realised gradually that he was construing it as our weakness and his reaction was quite different to them that Pakistan was weak at the moment that was why it was trying for peace”.

“This effort for interaction with Indian government was not a normal one: there is an ideology, which is RSS and what is happening in India is a huge bad luck for Indian people, not only for us… Kashmiris and this has its very serious repercussions for India that how you can exclude such a huge chunk of population that is around 500-600 million, as a minority and that India is only for Hindus and the rest are second class citizens,” PM Imran said.

He continued that such an ideology was not sustainable and with such an ideology, India did not need external enemies. He pointed out that India was more vulnerable to climate change than Pakistan, as all its glaciers were fed by Himalaya and these were melting fast. “We both should jointly make efforts to face the challenge of climate challenge,” he said.

“Our futures are connected. We both should focus on climate change together, but till now I’m not seeing that seriousness in world leaders because their commercial interests are clashing with steps needed to stop climate change,” he said.

“There are two problems in our region: trade is low because of political differences and conflicts and secondly we are connected because of climate change.” He said that once the Kashmir dispute was resolved, other issues could be jointly tackled as well such as smog and pollution. “Until both countries don’t sit together, no matter how much we do in Lahore to control smog, we will only solve half the problem, as there is a cover of pollution from Delhi to East Punjab,” he explained. “We had sublet our thought process and intellectualism and it had eroded too and started becoming a completely unoriginal country and would adopt the ideas from outside and our own original thinking is fizzled out.

PM Imran said problems solved through military means and wars were subject to miscalculations: Those who decide to solve problems through warfare have two traits; they don’t learn from history and they have pride in their weapons. “Miscalculations happen because of these two traits and weeks long wars keep continuing,” he said while referring to the Afghan conflict and Pakistan’s internal military operations.

He said the major issues of the region, including Afghanistan and Kashmir, could only be resolved through dialogue and he urged the world leaders to play their role in averting the impending humanitarian crisis in Afghanistan by releasing their frozen assets. PM Imran contended these assets were linked with saving the lives of 40 million Afghan people, who have been suffering for long.

“Through the platform of OIC, in its forthcoming foreign ministers meeting, we will try to play our role for saving Afghan people against any humanitarian crisis,” he added. Prime Minister said under our geo-economics approach, Pakistan wants to enhance the connectivity for increasing trade with regional countries. He said in this regard “we are trying to take maximum benefit from CPEC” while stressing the world nations not to polarise them on the pattern of cold war.