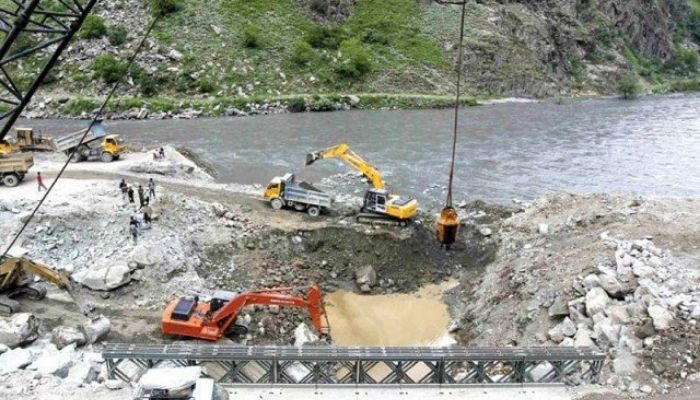 ISLAMABAD: India has accelerated its construction works on the 850MW Ratle Hydropower project and completed the 330MW Kishenganaga hydropower project on Pakistani rivers with objectionable designs, taking advantage of a World Bank halt in the mediation process between the two countries five years ago, The News reported.

The World Bank’s top management, which had served as a mediator to resolve Pakistan’s objections to the Indus Waters Treaty, took a pause on December 12, 2016, and suspended the process, asking the two countries to consider alternative ways to resolve their disagreements on both projects.

Pakistan was the first to approach the World Bank, requesting the establishment of an arbitration court to decide the destiny of the Kishenganga hydropower project, which is operational on the Jhelum River, and the 850MW Ratle hydropower project, which is under construction on the Chenab River. Later, India requested that the World Bank appoint neutral experts to address Pakistan’s concerns about the designs of both projects.

According to the World Bank, the appointment of a chairman of the Court of Arbitration, as requested by Pakistan, and a neutral expert, as requested by India, to resolve issues concerning two hydroelectric power plants under construction by India along the Indus rivers system were halted. The bank says that initiating both processes by Pakistan and India at the same time increases the risk of contradictory outcomes, which potentially endanger the Treaty.

Top sources in the water resources ministry and the Pakistan Commission of Indus Water told The News that India, not only has rampant up the construction work on its projects , taking advantage of the World Bank’s halt, but has also submitted to the United Nations its final design of the Ratle project without allaying the concerns of Pakistan for qualifying the carbon credits.

In 2017, India completed the Kishenganga project with an objectionable design, one year after the World Bank put a stop to it, and now it is resuming construction on the Ratle Hydropower project site with a design that does not comply with the provisions of the Water Treaty, as Pakistan has objected. On April 3, 2018, Pakistan wrote to the World Bank, claiming that the Bank’s suspension had given the Indian side time to construct the Kishenganga project.

And, if the Ratle project is finished in the midst of the World Bank’s ongoing pause, Pakistan will be forced to accept a 40% reduction in water flows slated for Sialkot Headmarala. This means that irrigation of numerous crops in Punjab, the country’s food basket, will be severely harmed. Once finished, the Ratle project will have a direct impact on the country’s food supply.

When contacted, Syed Mehr Ali Shah, joint secretary in the Water Resources Ministry and acting Pakistan’s Commissioner of Indus Waters, said he is in contact with the World Bank and that Pakistan has asked the World Bank to end the pause and establish a court of arbitration because India may take advantage of the pause. He also asserted that the World Bank had offered to mediate between the two countries, but that no progress had been made.

“We are optimistic that the World Bank will come up with a positive mind on the issue in response to the latest communication from Pakistan,” he said.

Shah said that Pakistan was the first country to approach the World Bank, requesting the establishment of an arbitration court, and that India followed suit, asking the World Bank to select a neutral expert. He stated that when a party asks the World Bank for a neutral expert or a court of arbitration, the Bank should first listen to that party. The World Bank plays a role in the Indus Waters Treaty’s dispute resolution process because it is also a party to the dispute between Pakistan and India. Pakistan had requested that the issues over the Kishenganga hydropower project on the Neelum River and the 850 MW Ratle hydropower project on the Chenab River be resolved.

Pakistan had four objections to the Rattle project. The freeboard should be one metre rather than two metres, the poundage should be eight million cubic metres rather than 24 million, the intake level should be 8.8 metres, and the spillways should be 20 metres high.

In his comments, Arshad H Abbasi, a member of the SDPI who has worked extensively on transboundary water issues with India under the Track-II Policy, claimed that Pakistan’s Commission of Indus Waters has never raised genuine concerns about the Ratle Hydropower project, arguing that it hasn’t raised the project’s seismic vulnerability or structural stability.

It has also failed to persuade the World Bank to end the delay, which is still in place and preparing the path for the project to be completed with an undesirable design. He further alleged that the Pakistan Commission of Indus Water is not up to date on the progress of the Ratle project’s construction.

Engr M A Jabbar, who monitors water-related issues with India, said the government lacks knowledge-based professionals to provide accurate technical input to its negotiators and lawyers in order to fight its case both at the bilateral level at the PCIW (Permanent Commission of Indus Waters) and in international forums.

According to top sources, India has completed significant civil works on the Ratle project, including two diversion tunnels, an upstream bridge, and upstream and downstream roads, and will soon begin construction on the dam portion, which will reach a height of nearly 134 metres. The Indian authorities plan to take advantage of the World Bank’s hiatus by starting construction on the pressure shaft and power house as soon as possible.

The Ratle project, which is located in the J&K state’s Kishtwar region, is fundamentally located in the central crystalline sequences of the Higher Himalaya. This area has experienced significant tectonic deformation as well as seismic activity.

The highway runs along the river’s left bank. The distance between project components is approximately 129 kilometres, while the aerial distance from Head Marala is around 129 kilometres.

The Ratle Dam, with a gross reservoir capacity of 18,646 acres and a live storage capacity of 8,107 acres, but a height of 191 feet, could have a tremendous impact on Pakistan if it fails. It’s upstream from dams like Baglihar and Sawalkot that are being built, as well as the Salal Hydropower Project, which is already operational.