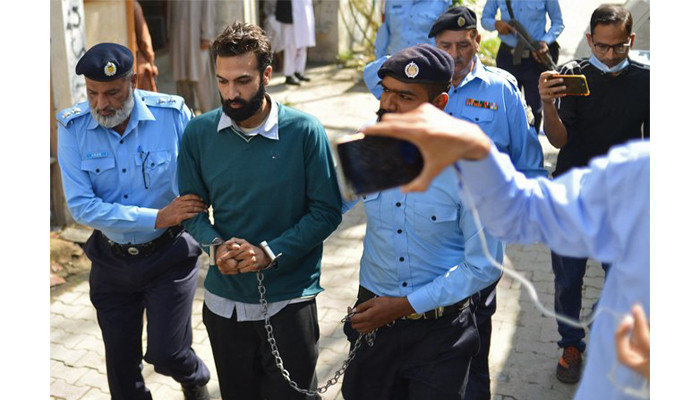 ISLAMABAD: Zahir Jaffer — the main suspect in the Noor Mukadam case — has filed a petition against the Inspector General (IG) of Islamabad Police Ahsan Younas to “clarify the strong evidence against him”, Geo News reported on Wednesday.

Apart from that, Zahir’s lawyer Sikandar Zulqarnain filed two other petitions in the court.

In the second petition, it was said that the number mentioned by the complainant Shaukat Mukadam should be verified.

The third application filed by the advocate said that the map of the crime scene should be corrected as “it is wrong” and legal action should be taken against the investigation officer (IO).

Talking to the media, the plaintiff’s lawyer Shah Khawar said that the “move has not affected prosecution’s stance”, adding that the CCTV footage also proved against the suspect’s statement.

On January 25, a meeting related to Noor Mukadam’s murder case was led by IG Islamabad Mohammad Ahsan Younus which confirmed that strong and sufficient evidence has been collected against the main accused Zahir Jaffer.

The forensic report confirmed that Noor was raped before she was killed. It further stated that Zahir’s skin was found underneath the victim’s nails as she tried to save herself.

A Swiss army knife and a knuckle punch were also recovered from the crime scene which was covered with the victim’s blood, per the report.

“These are very strong pieces of forensic evidence and the investigation team is committed to seeking justice for Noor Mukadam,” the IG had said.

The prime suspect in the murder of Noor Mukadam, Zahir, was formally charged for the crime by an Islamabad court in October 2021. Besides him, two of the family’s employees — Jamil and Jan Mohammad — were also indicted, along with Zahoor.

Noor Mukadam, a 27-year-old woman, was murdered on July 20 within the limits of the ​Kohsar police station in Islamabad’s F-7 area.

The Islamabad police arrested suspect Zahir on the night of July 20 from his house where, according to Noor’s parents, he killed her with a sharp instrument and severed her head.